The Covid-19 pandemic has clearly affected our daily lives and the well-being of the global economy. But the impact on financial markets has been less straightforward.

Firstly, equities appear to have looked through the economic consequences of the virus. Last year, the Covid-19 crisis triggered one of the deepest recessions in history which saw global growth contract by 3.6% year-on-year. After the initial selloff in stock markets, global equities - as measured by the MSCI AC World index - went on to deliver a 15% return in 2020.

Markets were certainly lifted by the sheer size of fiscal and monetary stimulus provided by authorities around the world.

So, as long as policy support was plentiful, equities were complacent about the negative economic impacts from Covid-19. But looking deeper under the surface, the virus has played an important part in the fortunes of certain equity styles and sectors.

Secondly, investing in countries based on the success of managing Covid-19 and the vaccine roll-out has been a challenge. We do see a pattern whereby countries whose growth expectations have been upgraded have generally been those that have led the way in the vaccine race.

But this has not translated into higher equity returns in these markets. Instead, the relationship between vaccination rates and growth expectations has played out more notably in the currency markets.

Over the past decade, with the rise of the technology (tech) sector, global growth stocks have outperformed their value peers. But the difference in returns between growth and value was stark in 2020, with the MSCI AC World Growth index beating the value equivalent by a historical record of 33%.

With the global economy in recession and the expansion of quantitative easing by central banks, US 10-year Treasury bonds rallied by 13% in 2020. Growth sectors such as tech and consumer discretionary had double-digit returns. The tech sector not only benefitted from consumers’ greater reliance on it while working from home, but both sectors were also boosted by the sharp fall in government bond yields (chart 1).

On the opposite side of the spectrum, the more economically sensitive and value-oriented sectors, such as energy and financials, suffered losses. In particular, the energy complex had the worst performance year since the Global Financial Crisis (GFC). 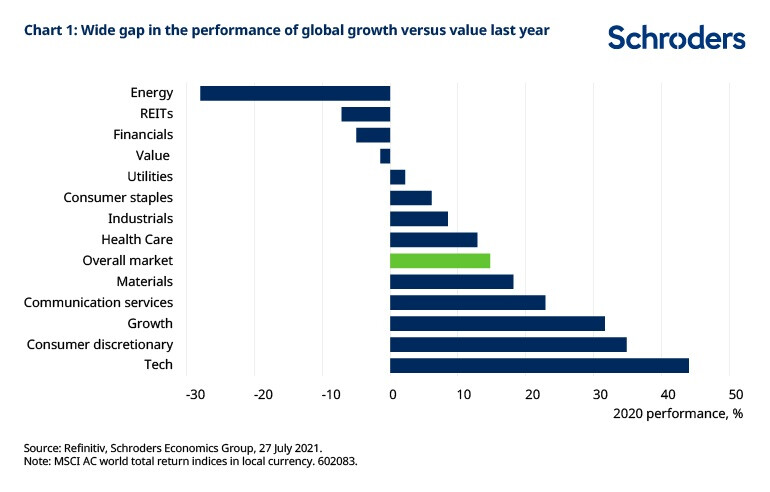 That said, the performance fortunes of the value trade turned brighter at the start of this year. The roll-out of the vaccine, a larger-than-expected fiscal package in the US and the significant decline in new Covid-19 cases sparked a resurgence in value stocks (chart 2).

But in recent months, despite the rally in global equities and earnings growth of the value sector catching up with its growth counterpart, investors have shifted back into the comfort of growth markets. The delta variant has led to a third wave of new cases, even in countries where a relatively high proportion of the population have been vaccinated. This has triggered renewed concerns over the global recovery and reintroduction of lockdown restrictions.

Looking ahead, as long as Covid-19 has a gravitational pull on bond yields and delays the re-opening of the world economy, it will remain a challenging environment for the value style and related sectors to shine. 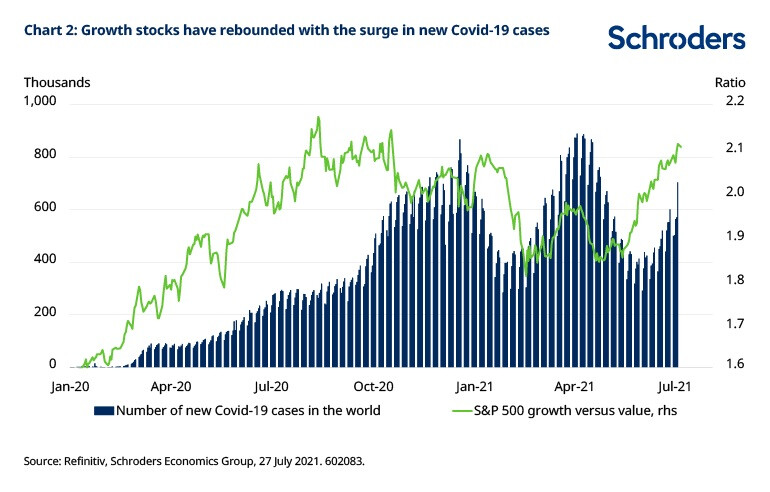 Has the vaccine roll-out mattered to investing across countries?

Last year, investors were generally rewarded in allocating to stock markets with an equity style bias rather than investing in a country based on their effectiveness in managing the pandemic. Equity indices that had large exposures to growth and technology sectors, such as the US and South Korea, were the performance winners.

Despite having one of the highest numbers of confirmed Covid-19 cases in the world, the US’ S&P 500 by far outperformed the rest of its developed peers. By contrast, markets with greater exposure to value-orientated sectors, like Europe and Australia, lagged in terms of performance. While Australia has been one of the success stories in the management of the virus (prior to the roll-out of the vaccine worldwide), the stock market ended 2020 on a relatively flat note.

This year, the vaccine roll-out has been one of the key drivers of optimism in the markets. In particular, the expectation of a return to normality has led many analysts to upgrade their outlook on global growth.  While there are other factors that drive a country’s growth prospects, we found there were more growth upgrades in countries with a higher proportion of the population vaccinated. 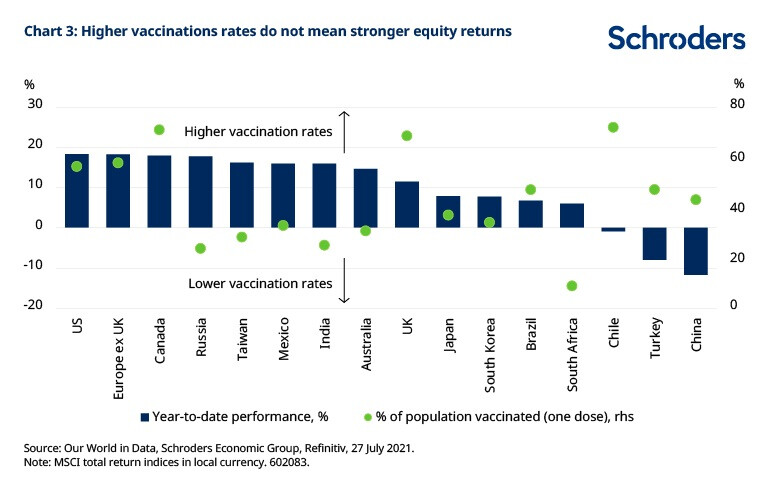 But looking at equity performance across countries, the success of the vaccine roll-out has not necessarily meant stronger equity returns via expectations on earnings growth and economic activity (chart 3). Some of the countries with higher vaccination rates have been the best and worst performing stock markets. Instead, exposure to the sector winners mattered more. Russian equities, for instance, surged thanks to robust oil prices despite a large part of the population being unvaccinated. 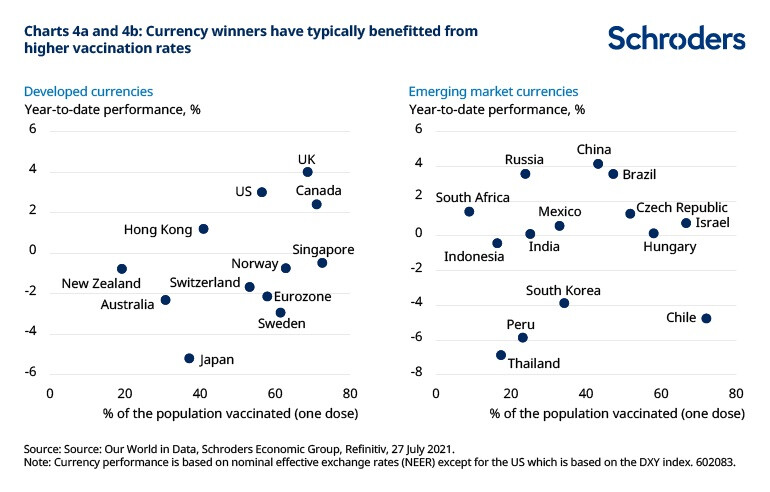 Meanwhile, the currency markets have paid greater attention to how well a country has been vaccinating its population. The currency winners this year, such as the UK pound, Canadian dollar and US dollar, have typically been those countries with higher vaccination rates (charts 4a and 4b). Of course, generous fiscal packages and outlooks on monetary policy would have also had a bearing on the strength of these currencies.

In comparison, the Japanese yen and Thai baht have been significant currency underperformers. This has been matched by downgrades to growth expectations and low vaccination rates. While a few of the commodity-exporting currencies in the emerging markets (such as the South African rand) have done better than indicated by vaccination rates, the Chilean peso has been a standout among its peers. The currency has been much weaker than suggested by the country’s decent vaccination rate and robust copper prices (copper exports account for around 10% of GDP in Chile). This is because macroeconomic fundamentals have been hindered by recent political developments and policy changes to its pension system.

Overall, Covid-19 has actually mattered to some markets more than others, such as the value style and related sectors. At the same time, the success of the vaccine roll-out across countries has played out better through currencies rather than the equity markets. More generally, it should not be forgotten that the increase in the severity of the delta variant or emergence of new variants can still present a downside risk to the economy and markets.