Outlook 2023, US small and mid caps: can outperformance continue?

It would appear that in 2022 US large cap and small and mid cap companies have performed similarly, considering the roughly equal market declines. However, beneath the surface the picture is very different. This is because a change in market leadership is underway which we think will continue into 2023, and potentially longer. Although large caps outperformed strongly in January 2022, since then small and mid caps have been steadily outperforming.

In theory, this is at odds with a US economy that is expected to slow down into a possible recession in 2023. Normally small and mid caps are considered less resilient in a more challenging economic environment.

There are reasons this leadership change is taking place and it is reminiscent of a similar time which led to an extended period of outperformance by small and mid caps. 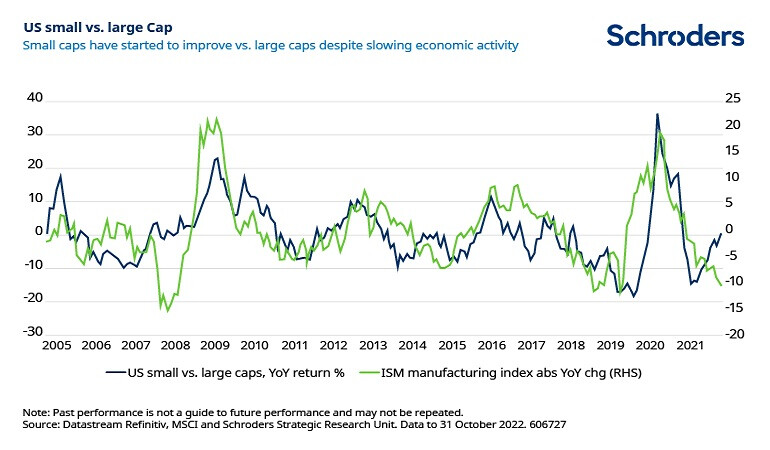 Both in the 1970s and after the bursting of the technology bubble in 2000, US smaller companies performed much better than larger companies for a number of years.

This outperformance from smaller companies occurred when the Federal Reserve (Fed) funds rates and economic growth were both rising and falling. This consistent outperformance through a variety of different economic environments occurred from a similar starting point - superior earnings growth coupled with low valuations relative to their large cap brethren. Past performance is no guide to the future, of course, but we see many similarities with the current environment. 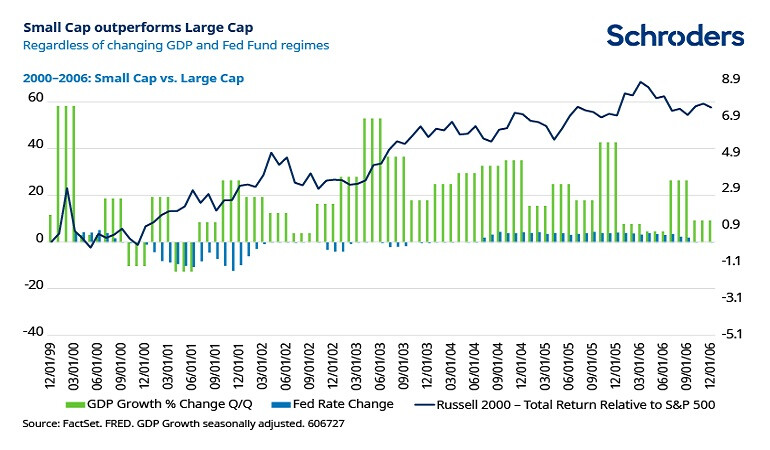 A good starting point to support US smaller companies is that today’s valuations are already pricing in a lot of bad news. The universe is not dominated, for example, by secular growth companies like the large-cap S&P 500 is. This means there is very little valuation premium that needs to unwind to adjust to a changing world economy.

Smaller companies have not been so cheap relative to large caps since the technology bubble in 1999-2001. In the seven-year period following the market peak in March 2000, small caps were up by more than 70% whereas large caps were up by less than 10%. The last time relative valuations were this cheap, and sentiment so poor, was followed by an outstanding period of absolute and relative returns for small and mid cap equities. 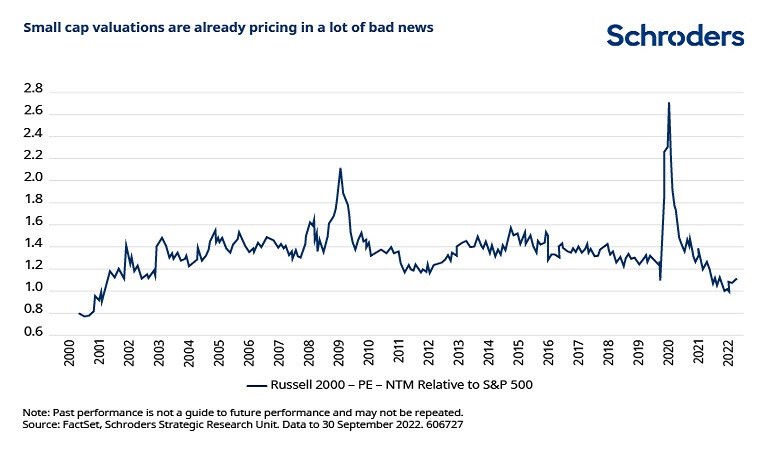 Depressed valuations are only one aspect of the favourable outlook for the asset class. Smaller, more domestically-oriented companies in the US are better positioned to benefit from changing trends in the US economy. Although the US consumer remains resilient, consumer spending is changing from goods to services. The goods economy remained robust during the Covid-19 pandemic, while the services economy remained closed. Smaller company earnings are much more geared to services, which should further fuel favorable relative earnings growth.

Another trend that was evident before the Covid-19 crisis, but has since accelerated, is the rise in capital spending in the U.S. There is a major initiative underway to reshore supply chains as globalisation starts to retreat. The US government is also providing major incentives to promote more domestic manufacturing enshrined in legislation through policy such as the Chips and Science Act and Inflation Reduction Act passed in 2022. The Infrastructure Bill of 2021 provides additional tailwinds.

Other factors supporting capex are efforts to reduce emissions and the need to spend on automation to mitigate labour shortages. Sales growth of smaller companies is highly correlated to US capex growth. This reflects the largely domestic focus of small cap businesses compared to large caps. This domestic exposure also insulates companies from translating non-US returns into US dollars.

Time to broaden out portfolio allocations

Retaining exposure to US equities remains an important allocation in a diversified investment portfolio but there are reasons to reconsider allocations across the asset class. Over much of the last decade, investing exclusively in the S&P 500 would have been the best decision. However, change is now underway. There are now good reasons for investors to broaden their allocations into mid and small cap US companies that are more attractively valued and better positioned for a changing market environment.

It’s also important to remember, given the size of the US economy, even “small” US-focused companies are large by international standards. This is important at a time when investors are rediscovering risk, as liquidity tightens due to rising interest rates, triggering a range of stresses. With market valuations ranging up to $20 billion, however, US small and mid caps are a well-traded and liquid asset class full of opportunities.