Dividends are expected to be slashed by 25% to 50% across the globe this year compared with 2019. This will be an unwelcome (if not entirely unexpected) development for many stock market investors.

Our analysis of nearly 150 years of data on the S&P 500 index of US stocks shows that bear markets for dividends like this – where dividends fall by at least 20% - are a rarity. There has only been one other since the end of World War II. This occurred during the Great Financial Crisis, when dividends fell by 24%.

In the past 149 years there have been only six, compared with 16 bear markets for total returns. We are truly living in exceptional times.

However, although dividend bear markets have been less frequent, the painful news for investors seeking attractive dividends is that they have historically lasted much longer than those for total returns (growth and income): 4.8 years compared with 1.5 years, on average (or 3.5 years compared with 1.3 years in the median case). The September 2008-March 2010 dividend bear market was relatively short compared with others (see the first infographic at the botom of the page).

This make sense. Share prices react in advance of economic improvement, whereas dividends don’t pick up until after companies’ financials improve.

In better times, bull markets in dividends – where dividends rise by at least 20% from the previous trough – also last much longer than in total returns – 17.2 years compared with 7.4 years. This is heavily influenced by one exceptionally long bull market for dividends, which lasted almost 70 years from 1940 to 2008.

However, even in the median case (which is not distorted by this experience), dividend bull markets have lasted 9.0 years compared with 5.3 years for total returns. This also makes sense. Companies don’t like cutting dividends because of the negative signal it sends about their future prospects.

These differences are accentuated once you take inflation into account (see the second infographic at the bottom of the page). The median bear market for real (i.e. inflation adjusted) dividends has been nine years long, compared with only 1.8 years for real total returns. The implication is that, although companies normally restore dividends after a cut, they continue to grow more slowly than inflation for an extended period.

This time is it different?

It could well be, but that may not provide the relief that investors are hoping for. Companies have acted quickly in response to the uncertainty brought on by Covid-19. Weaker companies need all available cash to fight for survival. Those in receipt of government support may be prevented from paying dividends or find it politically unpalatable to do so.

Banks in some countries have been instructed not to pay dividends in order to preserve capital so that they can provide finance to companies that need it. Even companies in otherwise strong shape have been forced to take a more conservative stance.

Dividend cuts have been fast, comprehensive, and relatively indiscriminate. This has not been a drawn-out episode. This offers hope that, although the severity of the dividend bear market may be harsh, its duration may be shorter than average. It could be more like the 2008-10 experience than those of more distant years.

The question then turns to what happens next? Although limited economic activity could resume as soon as some of the stricter lockdown conditions are eased, we are unlikely to return to anything like ‘business as usual’ for some time. This is likely to constrain the appetite and ability for dividends to rebound, at least in the near term.

Consistent with that, dividend futures contracts, financial instruments which allows investors to put on positions based on their views about the future path of dividends, are pricing in further declines in dividends in 2021.

However, as we look to 2021 and beyond, one theme that is likely to emerge is greater discrimination among companies. The widespread cuts that we are seeing this year are unlikely to be repeated - unless progress on a vaccine fizzles out and second waves of infection result in extended lockdowns through next year.

Companies that have adopted a more conservative dividend stance but where the underlying business is robust will be in good shape to restore and start to grow dividends once again, once economies start to open up. In contrast, weaker companies will need much longer to repair their balance sheets.  As a result, 2021 could well be characterised by material dispersion in pay-outs.

2022 looks more promising. Futures contracts are pricing in almost 10% dividend growth for the US market overall. However, importantly, this would still leave them almost 20% below their level in 2019. It is not until the end of 2027 that futures markets are pricing US dividends to get back to reach those heights again. It is a similar, or worse, story in other markets. Investors need to reset their expectations for several years of lower dividend income.

However, that does not mean that income investors should abandon stocks. Investors who are able to discriminate between companies with better prospects and the market overall will be in a much stronger position to deliver stronger and more sustainable growth in dividends over time. In addition, with government and corporate bond yields also plummeting, yields on stocks are likely to retain appeal compared with alternatives.

This information is not an offer, solicitation or recommendation to adopt any investment strategy. 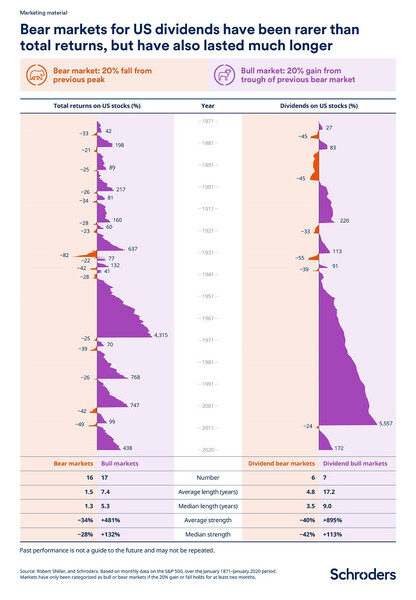 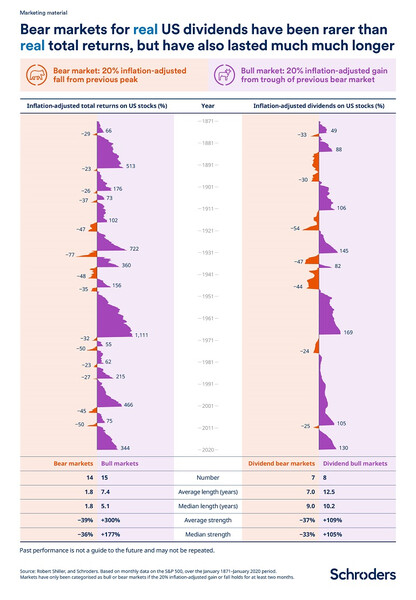