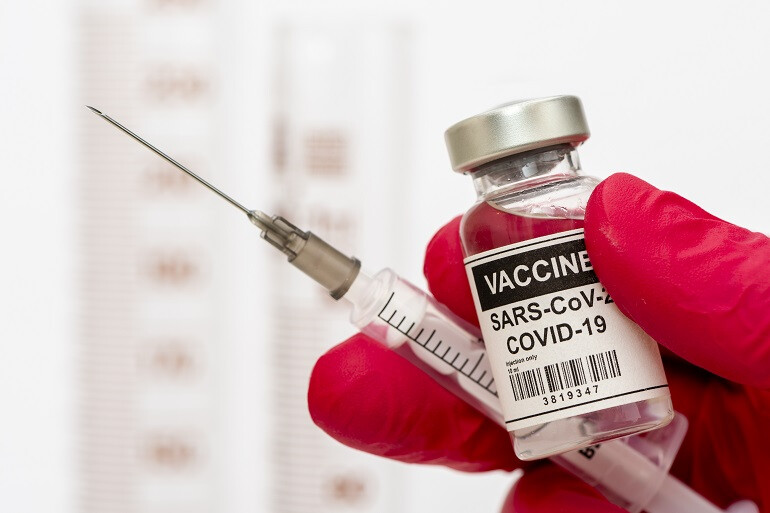 News that effective vaccines against Covid-19 are slowly being rolled out in some parts of the world has brought the end of the corona crisis into view and buoyed investor sentiment.

But we are not yet out of the woods, particularly in emerging markets (EM) where some countries are suffering renewed outbreaks of the virus. Governments do not have enough doses of vaccines on order to immunise entire populations. And the task of distributing them will be an even tougher challenge than in developed markets.

As has historically been the case, vaccination will play out in different ways across the emerging world. Much will depend on which particular vaccines countries opt for, how easily they are able to vaccinate the population, and the structure of their economies.

EM vaccine uptake is likely to be high – but are sufficient doses on order?

Uptake of vaccinations against Covid-19 is likely to be relatively high in EM compared to developed markets. According to a survey conducted by Ipsos Mori, over 80% of respondents in large EM such as China, India and Brazil said they would take a vaccine if it were available. This compared to only two-thirds of respondents in the US and parts of Europe, as the chart below illustrates. 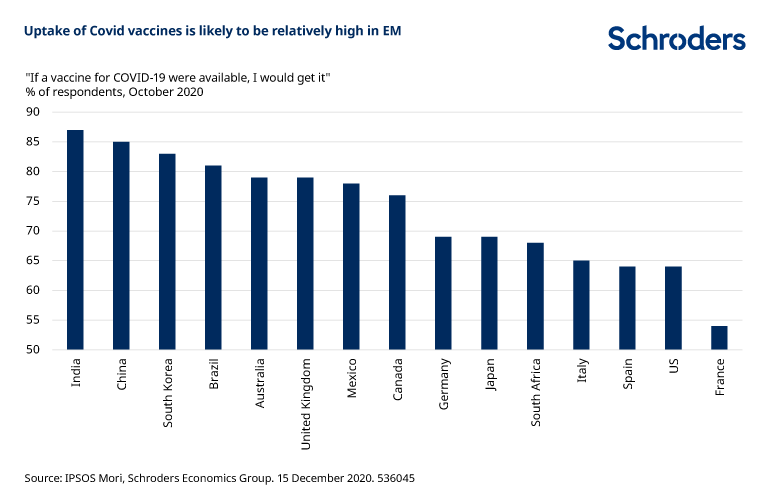 These figures are perhaps not surprising given that the economic and human consequences of Covid-19 have generally been more acute in many EM countries. But wanting a vaccine and actually getting a vaccine are two very different things.

Multilateral organisations such as the World Health Organization have worked hard to ensure fair distribution of vaccines around the world. But despite their best efforts, it seems clear that EM countries will find themselves at the back of the queue for shots. Only China and Russia are developing their own treatments; the rest will rely on securing supplies from abroad.

It is hard to find comprehensive and comparable data on the number of vaccine doses that each EM has pre-ordered. And the situation is clearly in a state of flux as various manufacturers release the results of their trials and apply for approvals in different countries.

Looking at various sources, it is clear that many developed markets have been able to pre-order enough vaccine doses to immunise their populations several times over. By contrast, coverage is much lower in EM as the chart below highlights. Apart from Chile, no other major EM has enough vaccines on order to vaccinate all of their population.

Two obvious gaps in this data set area China and South Africa. Various different vaccines are being developed in China. And it has recently announced the purchase of 100 million doses of the BioNTech vaccine. This is a small volume, given China’s population of around 1.4 billion. But the fact that China has agreed deals to sell domestically produced vaccines to at least 15 countries around the world suggests that the authorities are confident in having sufficient coverage. 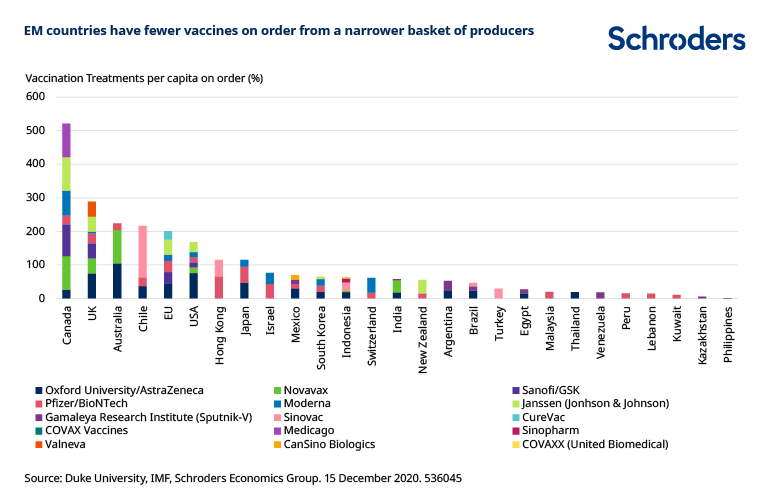 Why there are other hurdles to vaccine roll-out in EM

EM countries have generally only secured vaccines from a narrow range of manufacturers, none of which are yet approved for use. No large EM have ordered the Pfizer/BioNTech treatment that is starting to be rolled out in the UK and US. Perhaps because it is relatively expensive and requires extremely cold storage. Instead, many are relying on a combination of the Oxford/AstraZeneca vaccine and those being developed in China (Sinovac, Sinopharm, CanSino etc.) and Russia (Gamaleya’s Sputnik V).

At the very least, EM that are relying on vaccines that are still in development will have to wait longer until they can immunise their populations. But there is a risk that some of these vaccines will be delayed. For example, Sanofi/GSK recently announced that their treatment will be delayed until late 2021. Or worse, that they will eventually prove to not be effective at all.

The upshot is that expectations for a rapid roll-out of vaccines in EM should be tempered, at least until some of the treatments on order begin to be approved for use. And even when these vaccines do become available, it will still be a monumental logistical challenge to distribute them.

In addition to being expensive, vaccines such as the one produced by Pfizer/BioNTech require extremely cold storage facilities. This particular vaccine will be difficult to disperse in those EM that do not have the correct infrastructure or have hot climates. In this respect, other vaccines such as Oxford/AstraZeneca or Johnson & Johnson that only require storage in normal fridges are likely to be more important for EM. An additional benefit of the Johnson & Johnson vaccine is that it is expected to require only one immunisation. But it will still be difficult to reach all corners of vast countries such as India and Brazil where infrastructure is also relatively poor.

What is the potential economic impact of vaccination?

The economic impact of vaccination will also vary across the emerging world. One obvious reason for this is that some EM such as China and Taiwan have dealt with Covid relatively well. And the structure of these economies also means that they will benefit less from the roll-out of vaccines. In fact, it is possible they could even suffer economically as the world is immunised.

With vast swathes of the world’s services sector locked down during the pandemic, consumers have focused on purchases of goods. And as a result, these economies have benefitted from robust demand for manufactured exports. As vaccines drive some “normalisation” of economic activity, a rebalancing towards the consumption of services and away from goods trade may not give as much growth impetus in export-led economies as it is at the moment.

In the same vein, those EM economies such as Brazil, that rely more on the services sector to drive growth and suffered badly during 2020, ought to benefit more once vaccines are distributed. A resumption of international tourism would also benefit many smaller EM such as Thailand, Turkey and Egypt where the sector is an important source of growth. That said, it may take some time for confidence amongst travellers to recover. 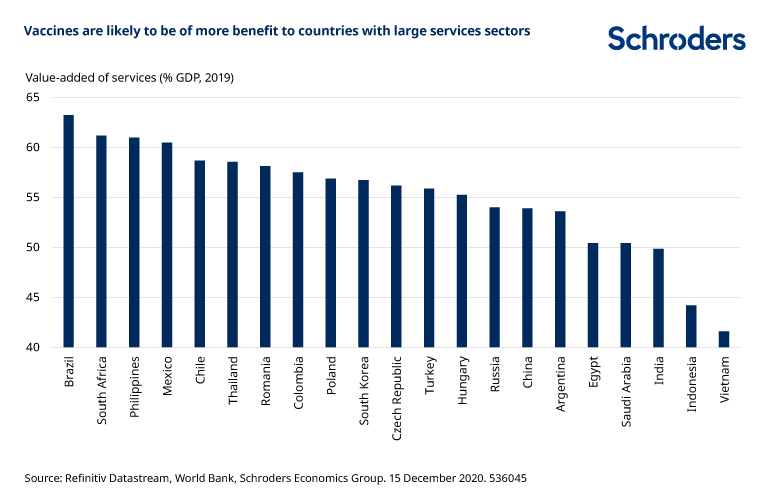 Which EM will benefit most from vaccines?

It seems that export-led EM economies in Asia and Europe have less to gain from the roll-out of vaccines. Conversely, others such as Brazil, South Africa and India stand to gain the most. Infection levels have been relatively high, populations are willing to be vaccinated, the economies have suffered deep recessions and, apart from India, have large services sectors.

The concern is that it will be extremely difficult to roll-out vaccines and as things stand, none of these EM countries have enough proven treatments on order to immunise their populations. The longer it takes to deal with Covid, the greater the risk of long-term scarring that would mean these economies will never be the same again.

This marketing material is for professional investors or advisers only. This site is not suitable for retail clients.

Registered No: 1893220 England. Authorised and regulated by the Financial Conduct Authority.