Companies who are already reducing their emissions should prove lower risk investments as the pace of regulation picks up. 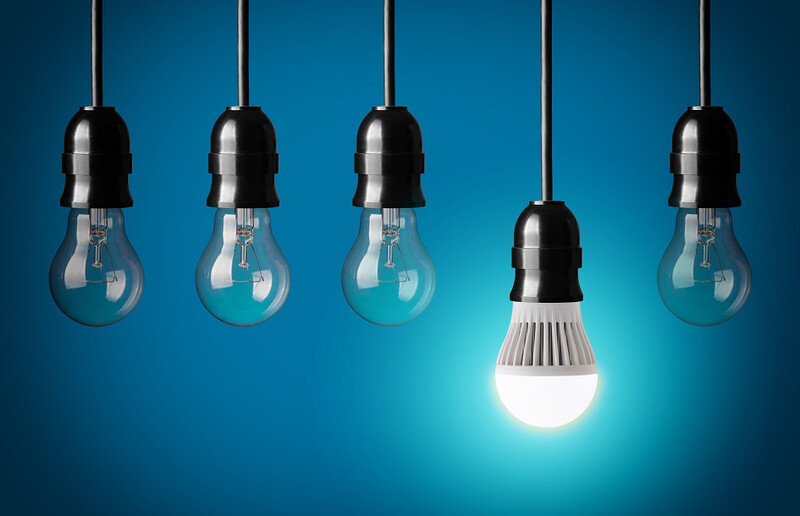 When it comes to climate change investing, the tendency is to think of the opportunities presented by companies who are enabling the transition to a low carbon future. Such companies supply the products, services and technologies that are critical to abating future emissions.

But there’s another important investment theme emerging: the concept of climate leaders. Such companies can operate in any field, but what they have in common is their ambition to lead their industry on the path of reducing greenhouse gas emissions.

We think companies who are leading the way in decarbonisation should be good investments, and there are three reasons why:

In this piece we’ll focus on the rising regulation and litigation around emissions and why climate leaders should reap a benefit.

Regulatory changes around environmental and climate considerations cover a huge breadth of different areas. This is visible in a range of recent legislation and legal action:

Such examples give a flavour of the regulatory and legal risks faced by companies who continue to cause pollution and harmful emissions.

The risk of stranded assets is of particular concern to fossil fuel companies already, but will increasingly extend to other long lived assets that are not consistent with a net zero economy.

Stranded assets are assets that turn out to be worth less than expected as a result of changes associated with the energy transition. For example, companies may find they make investments in oil-producing assets which can never come onstream, or which have to be closed down early, as a result of legislation to reduce emissions.

Real estate is another industry facing particular risks. In addition to the physical risks from a changing climate and rising sea levels, the need to invest to comply with stricter energy and emission legislation will shorten the useful life of inferior properties.

The shipping and aviation industries also have very long lived assets, where current and future regulations to decarbonise the industry are likely to require a new investment cycle and the early retirement of high emission assets.

Such risks can be harmful to a company’s reputation, and to its finances too. Volkswagen has sought to restore its reputation since the 2015 “dieselgate” scandal and is now a major producer of electric vehicles. It has paid out over €32 billion in refits, fines and legal costs as a result of the scandal.

We see climate litigation as a growing risk for companies. The vulnerable companies will be those which are meaningful contributors to climate change, or are failing to manage the risks posed by climate change to their business, or those presenting a green façade to consumers which is not supported by the facts (‘greenwashing’).

In 2021 a Dutch court’s ruled that Shell’s climate plans weren’t sufficient and imposed new minimum targets for emissions reductions, taking the company strategy at least partially out of management (and shareholder) hands. The Bank of England has also recently noted that climate litigation cases globally have doubled since 2015.

We’ve already seen a boom in country level commitments to combat climate change. We’re now seeing a rise in such commitments from companies too, as individual companies set out their own strategies to decarbonise their operations and supply chains.

However, as the chart below shows, there is no industry where a majority of companies have so far adopted net zero targets. Net zero means cutting greenhouse gas emissions to as close to zero as possible. To keep global warming to no more than 1.5°C  – as called for in the Paris Agreement – emissions need to be reduced by 45% by 2030 and reach net zero by 2050. 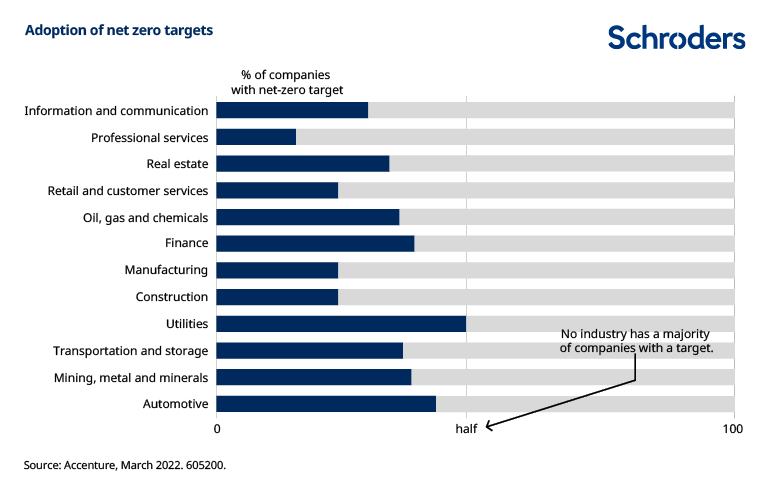 Regulation is only going to increase as the need to respond to climate change becomes ever more urgent. Companies who don’t reposition their businesses and put in place measures to get to net zero risk being left behind with outdated products and technology.

By contrast, those who have already taken steps to decarbonise their businesses will be much better placed as the pace of regulation increases and the cost of compliance rises. We think there is significant potential for returns to be made by separating the climate leaders from the laggards.