Europe’s gas crisis: what does it mean for investors?

Europe faces high gas prices and potential shortages as supply from Russia dwindles. We ask our investment experts what this means for companies, the energy transition, and the eurozone economy. 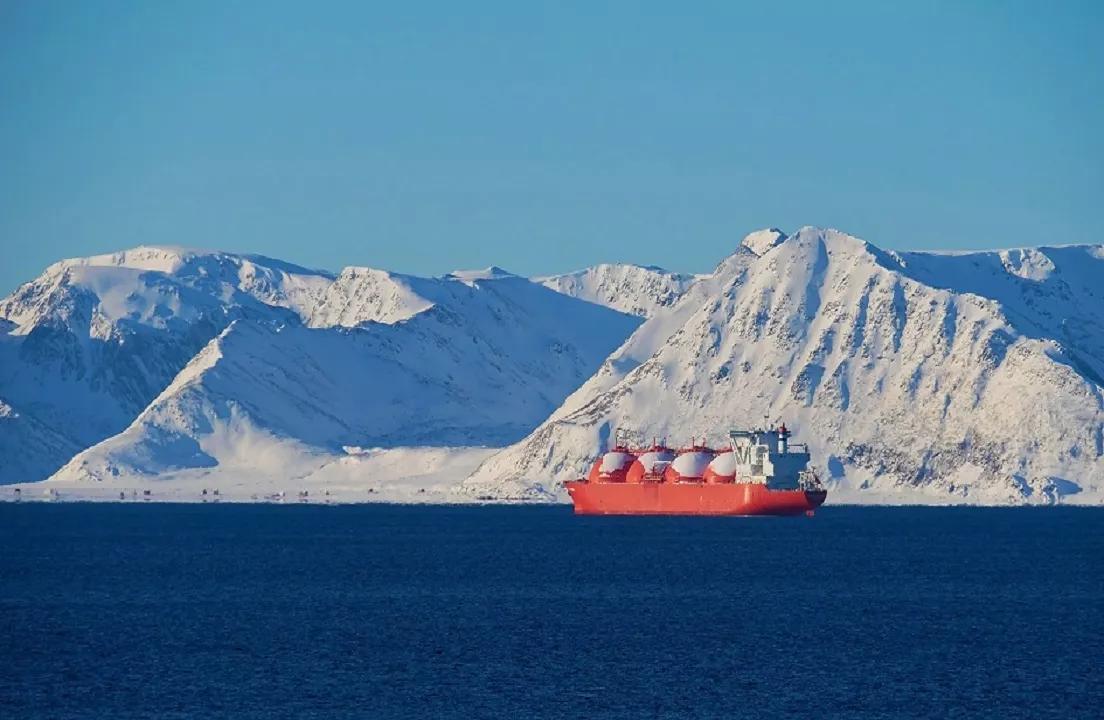 Europe’s precarious gas supply situation has been a prime focus for markets ever since Russia’s invasion of Ukraine at the end of February.

The European Union (EU) and others were quick to apply sanctions to Russian oil. However, gas is a more complicated matter given the reliance of major European economies – most notably Germany – on natural gas from Russia.

The situation became even more critical when a major supply pipeline – Nord Stream 1 – was closed for maintenance in July. While the pipeline has now come back onstream, gas is being supplied at a reduced volume. 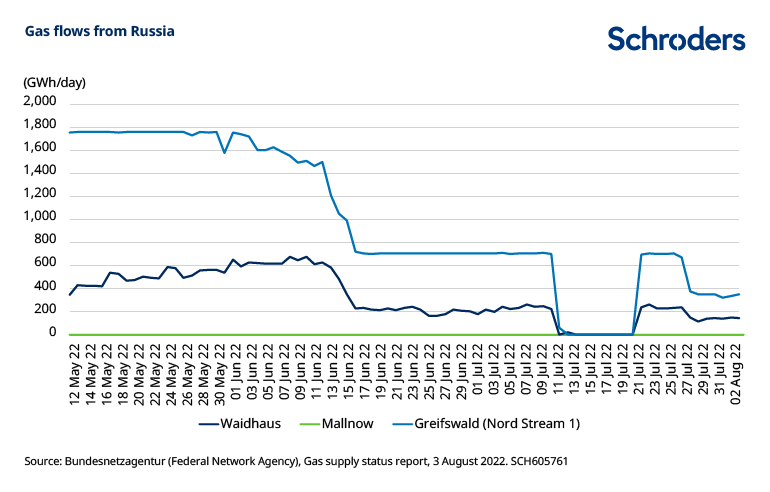 Gas demand is lower in the summer, but this reduced supply puts in jeopardy the EU’s aim of filling gas storage sites to 80% capacity in November this year, and to 90% in 2023.

We asked our investment experts what this means for Europe’s economies and markets.

What is the impact on gas prices?

“Europe is facing an 18-24 month period of very high gas and electricity prices”, said Mark Lacey, Head of Global Resource Equities. “Europe has become and will remain the premium market for gas over this period, with prices above those in Asia or the US. This premium will last until we start to see meaningful new volumes come onstream from 2024/25”. 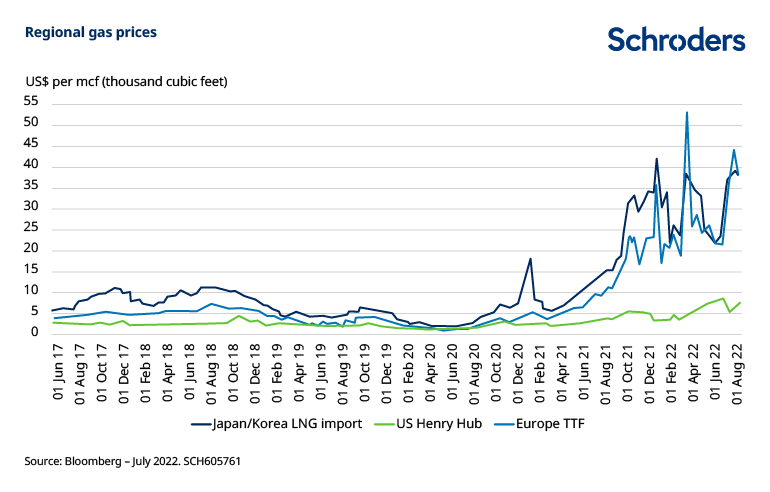 High prices can be tackled via two methods: a reduction in demand or an increase in supply. European countries are taking steps to tackle the demand side.

Azad Zangana, Senior European Economist and Strategist, said: “EU member states recently agreed to a voluntary 15% reduction in the consumption of gas, but this could become mandatory if supply continues to be disrupted.

“While energy inflation fell back from 42% year-on-year (y/y) to 39.7% y/y in the latest reading, we expect further price increases to keep energy and headline inflation elevated in the second half of this year, which in turn will reduce the spending power of households.”

The high prices may in themselves cause demand to drop as users limit their gas consumption.

Mark Lacey said: “Following a price increase of around 400% year-on-year, it is inevitable that some element of demand is destroyed. Gas demand in Europe will likely fall around 10% in 2022. Even at lower prices, it is unlikely to grow significantly in 2023 given the risk of recession”.

The table below indicates how gas demand is expected to fall this year in most parts of Europe. 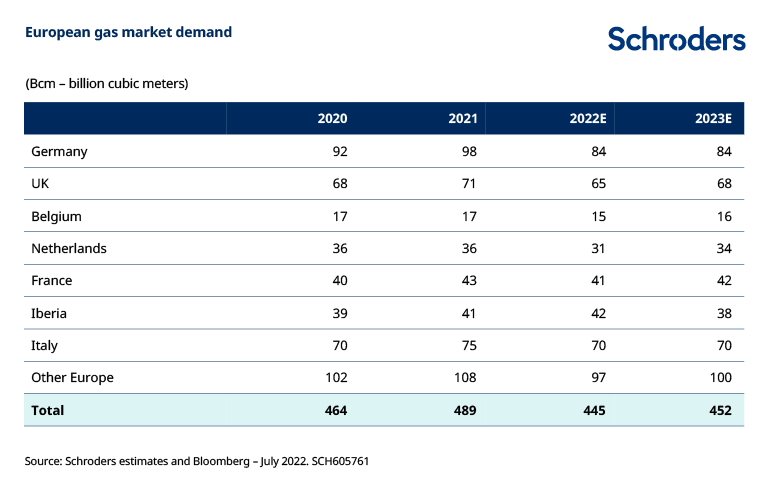 Countries in the EU have very different profiles in terms of the amount of gas previously supplied by Russia.

Environmental Economist Irene Lauro said: “The EU imports 90% of its gas consumption, with Russia providing around 45% of those imports in 2021. Austria and Poland imported more than 80% of gas from Russia in 2021, Germany more than 50%, while for France and Spain the share was less than 8%.”

Some countries have alternative options to gas piped from Russia. Countries such as the UK and Spain have significant LNG (liquified natural gas) capacity, meaning they can receive imported LNG cargoes. Italy has recently signed a series of gas deals with Algeria. However, there isn’t always the infrastructure in place (regasification plants to turn the LNG back into gas, or the pipelines) to supply this gas to central parts of Europe where it is most urgently needed.

The chart below highlights how renewables can be part of the answer to the gas shortage. The chart shows the average annual percentage of electricity generation dependent on Russian natural gas in blue, while green represents projected renewables growth in the period 2021-23. 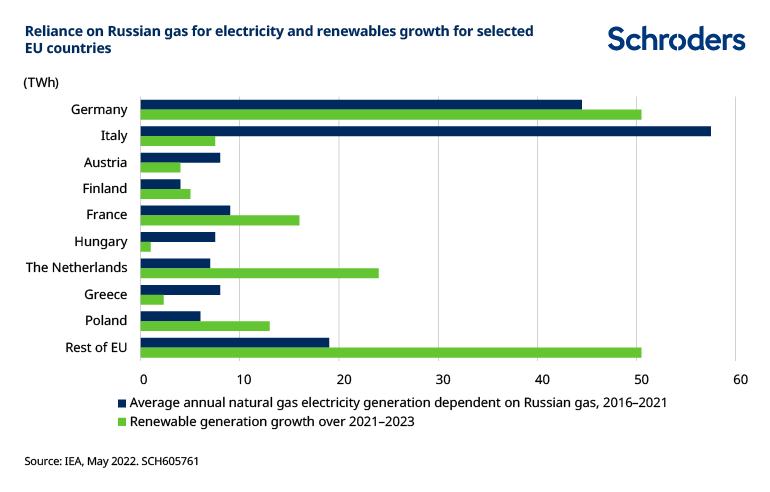 Irene Lauro said: “Germany and Italy heavily rely on Russia in terms of absolute electricity generation. However, based on IEA’s wind and solar expectations for the next two years, and given current policies, the potential for renewables to reduce dependency in Germany is significantly higher than in Italy. Meanwhile, France and the Netherlands’ reliance on Russian gas is relatively low, with a significant potential for renewables to displace Russian gas.”

What is the near-term corporate impact?

Germany’s reliance on the Nord Stream 1 pipeline, and lack of alternative options, means it is the major economy most at risk of gas shortages. Earlier this year, the German government unveiled a three-step plan for gas rationing that could see supply reduced to industry in order to ensure availability for households and critical institutions like hospitals.

Under such a scenario, energy-intensive sectors such as metals production and chemicals would be the most affected in the short term.

Arianna Fox, European Equities Analyst, said: “The chemicals industry is one that is directly exposed to gas shortage risk given how energy-intensive it is and how so much of the industry is concentrated in Germany. The government could introduce rationing but there are still many questions as to how this would play out.

“For example, would all industries face the same level of rationing? It might be the case that the government would try to protect industries such as food & beverage production, or healthcare companies. If that’s the case, then other industries like chemicals would have to shoulder a larger burden, hitting their production harder.

“The trouble is that chemicals are used in so many products and processes. Ultimately, every industry would feel the impact of reduced supply or higher prices for chemicals. Businesses could try to import the chemicals they need from outside of Europe but supply chains are still disrupted post Covid, and there’s no guarantee that plants outside Europe have spare capacity.”

Of course, rationing is not currently in place, but financial markets hate uncertainty. Share prices of European chemicals companies have fallen sharply as a result.

Arianna Fox said: “Some chemicals companies may potentially look like attractive investments, given how far shares have already fallen, especially if the ‘worst case scenario’ of a shut-off of Russian gas does not transpire.” 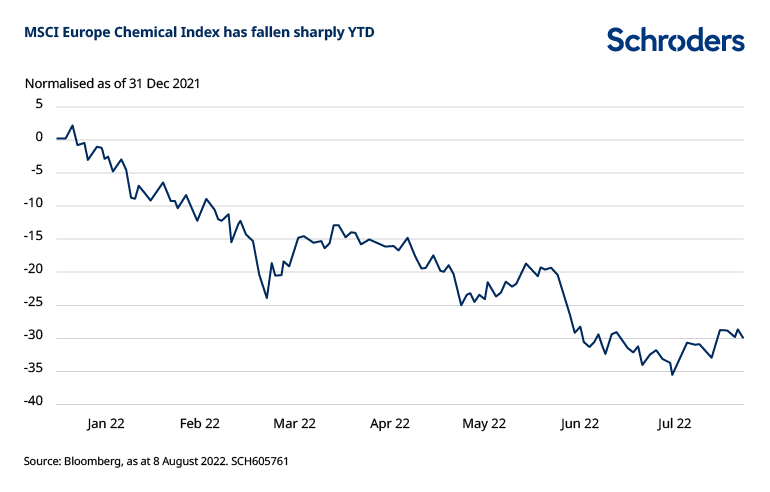 And indeed, it may be that the much-feared cut-off of all Russian supply does not materialise.

Mark Lacey said: “We think that a continuation of pipeline flows (albeit at reduced levels) is more likely than a complete cut-off. A cut-off would see Russia lose all its political and economic leverage over Europe. Also, the loss revenues from gas sales must be having a significant impact on the country’s export revenues.”

It may also be that households are asked to shoulder more of the burden, which would help to protect the corporate sector. Germany has unveiled plans for a levy on gas that would affect households too.

The high gas prices are just one of several factors that could weigh on economic activity. German GDP growth was zero in Q2, albeit Q1 growth was revised higher.

Azad Zangana said: “We continue to expect reasonable growth for southern EU member states, which have not enjoyed a full tourism season since 2019.

“However, it’s clear from Germany’s performance that global capital investment has slowed in response to rising interest rates and concerns over growth. China’s draconian lockdowns have not helped matters either. With the heavy reliance on Russian gas to consider as well, it appears that the northern member states are particularly vulnerable going into the next two to three quarters.”

The possibility of a broader economic slowdown, or recession, further complicates the options of companies such as the chemicals producers who may be forced to cut their production volumes due to lack of gas.

Arianna Fox said: “Typically, companies facing volume declines try to protect profits by raising prices. But that’s difficult for chemicals firms in the current environment where customers have already endured price hikes. Instead, demand may be likely to fall.”

When will prices ease?

Demand for gas is not only high in Europe, but around the world. Countries are seeking to close down polluting coal plants and move to natural gas as an interim step towards reducing their greenhouse gas emissions. This means Europe is currently competing with countries such as India and China for LNG, with cargoes going to those who can pay the highest prices.

Another problem is that there is limited new LNG supply coming to the market over the next two years.

Mark Lacey said: “The main reason for this lack of supply is due to under-investment in upstream gas projects and project deferrals. This is largely because of the Covid-19 pandemic, as well as previously low regional gas prices.

“However, beyond the next 24 months, Europe starts to have some alternative options for supply of gas. That’s when we’ll start to see the ramp-up of new supply from the US and Qatar.”

That said, even when new LNG supply becomes available, gas prices are unlikely to come down to their previous levels given the growing demand from other regions and for gas as a transition fuel.

Mark Lacey said: “European (and Asian) gas prices have clear downside risk from current levels, but when they do ‘normalise’, they are likely to retrace to a higher base level. For example, rather than $5 - $10/mcf long term pricing, $12 - $18/Mcf pricing may be more sensible.”

This would have long-term implications for energy-intensive sectors like chemicals, even once the current crisis is over. They would still face higher costs than they had previously been used to, impacting their profitability.

Arianna Fox said: “This could cause a longer-term structural shift that would reduce the competitiveness of chemicals companies producing in Europe. Chemicals companies may seek to shift production to countries where the cost of gas is cheaper.”

Are there any winners?

In the medium to long term, a clear winner from the gas crisis is likely to be the renewable energy sector. The need to curb harmful emissions and to reduce reliance on Russian fossil fuel imports go hand in hand.

Renewable energy projects like wind or solar farms may not be instant solutions to the problem, but they are a lot quicker to get up and running than a nuclear power station, for example.

“This has a direct impact on renewable project returns, with developers noting that some project internal rates of return (a measure used to estimate profitability) have increased from 5-6% two years ago, to closer to 11-12% now.” 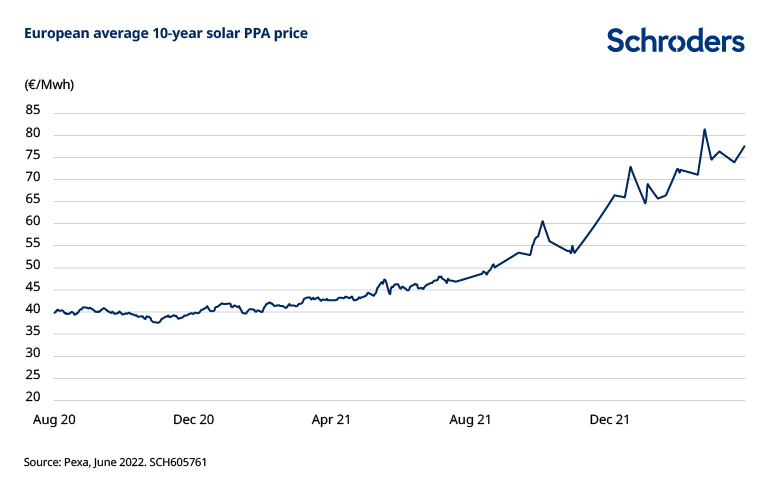 In May this year, the EU unveiled its “RePowerEU” plan which is designed to phase out dependency on Russian gas and ensure a more diversified supply of power from lower emission sources. This summer’s crisis and the low gas volumes coming from Russia heighten the need for that phase-out to accelerate. Ultimately, this will bring prices down and make the EU more self-sufficient in terms of power generation.

But it may not be a straightforward journey towards renewables. For example, measures to cushion the gas price impact on consumers may have unintended consequences.

“Subsidising energy consumption is important to help consumers with the cost of living crisis in the short run. But it can have some drawbacks, indirectly incentivising the use of fossil fuel energy and making the required switch from dirty to cleaner technologies even more expensive in the long run.”

However, in the near term, there is a clear winner that emerges from the current crisis: US gas producers. The higher gas prices make it economically viable to recover US gas than would have been possible with gas prices at $3.00/Mcf. 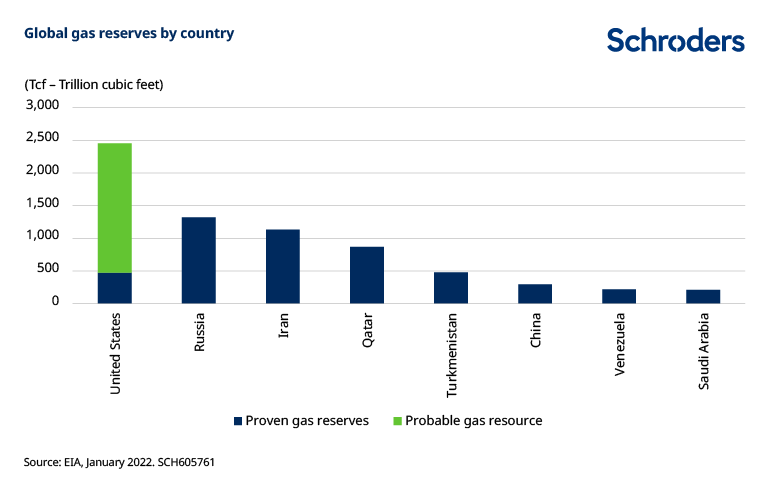 Mark Lacey said: “More importantly, around two-thirds of the total US gas resource base is in Texas, Pennsylvania, West Virginia and Oklahoma. All of these markets have transportable access to international markets and are conveniently located to export gas to Europe at an attractive price of around $8.90/Mcf.

“This is also likely to boost long-term US gas prices. Rather than retracing back down to their domestic cost of around $3.00/Mcf, we think it makes more sense for prices to trade around $5.00-$6.00/Mcf. Clearly, this increases the attractiveness of US gas companies to investors.”

Please ensure you read our legal important information before visiting the rest of our website.