A look back at markets in January when equities fell amid caution over the outlook for US interest rates and the uncertain situation in Ukraine. 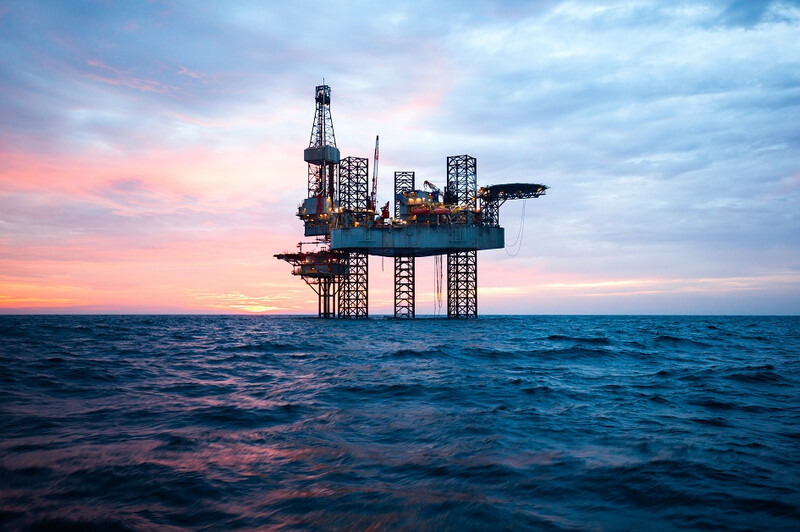 “The prospect of US interest rate hikes and Russia-Ukraine tensions meant there were few places for equity investors to hide in January as bond yields spiked. Growth-tilted sectors such as IT (-8.2%) and consumer discretionary (-8.0%) bore the brunt of losses. Meanwhile, rising inflation turbocharged energy stock prices (+13.1%),” Sean Markowicz, Schroders Strategic Research Unit. 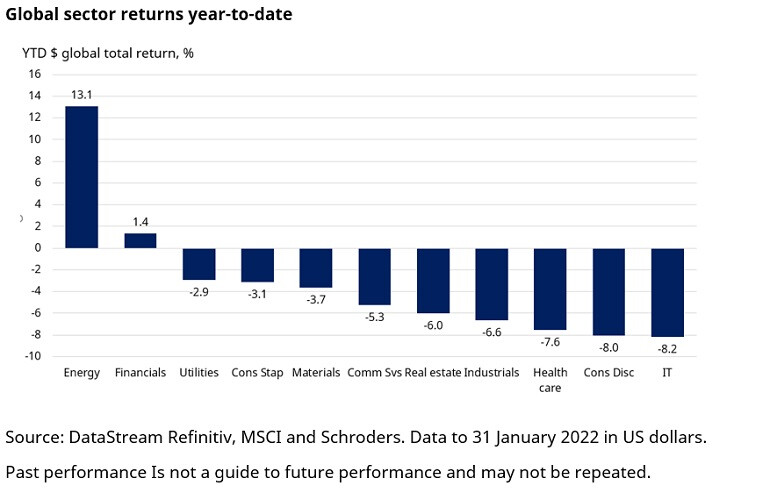 US stocks fell in January. Investors had already been eyeing expected rate hikes with caution when escalating tensions between the US and Russia over Ukraine added to worries, putting markets in reverse.

Comments from Federal Reserve (Fed) Chair Jerome Powell suggested a hike in March is extremely likely, underpinned by high inflation and a strong labour market. Chair Powell said: "reducing our balance sheet will occur after the process of raising interest rates has begun. Reductions will occur over time in a predictable manner primarily through adjustments to reinvestments so that securities roll off our balance sheet."

On the inflation outlook, he noted that, while the base case remains that inflation will decline substantially in the second half of 2022, there are risks that it could continue to surprise on the upside. In the meantime, early estimates put Q4 GDP growth at 6.9% (quarter on quarter, annualised), above expectations of a 5.5% increase.

The potential for sanctions to deter Russian activity in Ukraine pushed energy stocks significantly higher. Other sectors were largely weaker. Consumer discretionary and real estate were among the weakest market sectors in a month of widespread declines. Tech stocks also lagged the market as inflation concerns outweighed short-term optimism over the upcoming earnings season.

Eurozone shares fell in January amid caution over the outlook for US interest rates and the uncertain situation in Ukraine. There was a sharp divergence between value and growth segments of the market. The MSCI EMU Value Index registered a positive return. Lowly valued areas of the market such as energy and financials were the strongest sector performers.

By contrast, highly valued areas, especially those that had performed well in 2021, were among the main laggards. In particular, within the IT sector, software and semiconductors saw steep falls, as did the healthcare equipment & services subsector.

Soaring food and energy prices contributed to a rise in annual inflation to 5.0% in December, up from 4.9% in November. European Central Bank President Christine Lagarde rejected suggestions that the ECB should start to raise interest rates more quickly than planned in response to the above-target inflation. The ECB said in December that it was very unlikely to raise rates in 2022.

Data showed that eurozone GDP increased by 0.3% quarter-on-quarter in Q4 2021, taking the region’s economy back to its pre-pandemic size. The flash eurozone composite purchasing managers’ index slipped to an 11-month low of 52.4, given weakness in services due to the Omicron wave, which saw some countries impose restrictions on activity.

The manufacturing sector PMI rose to a five-month high of 59.0. (The PMI indices, produced by IHS Markit, are based on survey data from companies in the manufacturing and services sectors. A reading above 50 signals expansion).

UK equities were broadly unchanged over January. Large cap equities rose, with some sectors recording very strong absolute returns, while small and mid cap equities recorded losses. The internationally diversified large cap resources stocks, and banking and tobacco companies outperformed. These sectors were, respectively, the three largest positive performance contributors as investors rotated towards some deeply out of favour areas of the market.

In contrast to the volatile market conditions, consensus earnings growth estimates for UK quoted companies remained steady in January. Meanwhile, a number of consumer-facing companies were able to deliver positive earnings surprises in the month, notably some of the UK’s biggest retailers.

The latest monthly GDP data from the Office for National Statistics revealed that UK output grew a strong 0.9% in November. This was ahead of consensus expectations for growth of 0.4%, and saw the economy recover to its pre-pandemic peak.

Fears that the full impact of inflationary and interest rate trends had yet to fully hit home, however, continued to impact sentiment towards many of the domestically focused companies. Worries around a potential cost of living crisis also weighed on sentiment. Many Covid restrictions introduced before Christmas to tackle the Omicron variant were lifted. Despite this, a number of the companies in the travel and leisure sectors, which are reliant on economies reopening, extended share price losses from last year following negative earnings surprises.

The Japanese stock market ended January with a loss of 4.8%. Small cap indices yet again underperformed the broader market, with particularly sharp declines seen in the technology-focused Mothers market.

The tone for the equity market was set by the release of the minutes from the US Fed meeting, and the associated change in expectations for US interest rates. Although this had a negative impact on sentiment, such a move is still very unlikely to be followed by the Bank of Japan in the foreseeable future.

The change in outlook for US interest rates also helped to accelerate a change in market dynamics. In Japan, this was especially evident in the outperformance of value-style stocks at the expense of growth. Much of this relative gain in value stocks was concentrated in financial-related sectors including banks and insurance

Meanwhile, Japanese inflation remains very subdued and is likely to remain below the Bank of Japan’s target even as one-off factors drop out and the full impact of higher energy prices is felt. The primary factor in this is the very low level of wage increases in Japan, without which we are unlikely to see the type of upward spike in inflation that is underway elsewhere.

The other major factor in January was the sharp pick-up in Covid infections, driven by the Omicron variant. The absolute number of infections in Japan has remained remarkably low throughout the pandemic, but the latest variant has again demonstrated a higher level of risk aversion. The government has so far avoided re-imposing the state of emergency, but Japan’s borders remain closed to foreigners until at least the end of February. The overall impact of Omicron has been to push out further the expectations for a full recovery of Japan’s domestic economy.

Asia ex Japan equities recorded a modest decline in January amid a volatile month of trading sparked by the Fed’s plan to tackle higher inflation by raising interest rates, starting in March. With investors already concerned about rising oil prices, global supply chain problems and geopolitical tensions between Russia and Ukraine, the prospect of sustained hikes in the cost of borrowing by the world’s biggest economy further weakened sentiment towards many Asian markets.

The Philippines was the best-performing index market in January, with more muted gains achieved by Hong Kong, Indonesia and Thailand.

Emerging market (EM) equities recorded a negative return in January as markets priced in more aggressive policy tightening by the US Fed. South Korea was the weakest market in the MSCI EM index, exacerbated by disappointing Q4 corporate earnings results. Russia was firmly down as tensions with the West in relation to Ukraine continued to rise. China underperformed the index by a smaller margin. Macroeconomic data remained mixed and the authorities announced some modest monetary easing. Mexico, Taiwan, Malaysia and India also finished behind the index.

By contrast, net EM oil exporters, ex-Russia, were beneficiaries of higher energy prices; the result of rising geopolitical tensions in Russia, one of the world’s largest oil & gas producers. Saudi Arabia, Kuwait, Qatar, Colombia and the UAE all outperformed in MSCI EM index.

The Latin American markets of Brazil, Chile and Peru all finished ahead of the index. Brazilian equities and the currency rallied as economic activity proved more resilient than markets had anticipated. Meanwhile, ahead of the October presidential election, former president and candidate Luiz Inácio Lula da Silva indicated that he would seek to form a broad alliance. A moderation in political concerns was also supportive of the Chilean and Peruvian markets, as was a pick-up in copper prices.

Fed Chair Powell’s comments during the month indicated the US central bank would consider all options for the future path of policy. Markets took this as paving the way to potentially a more aggressive tightening trajectory. Year-on-year US consumer price inflation registered 7% in December, the highest since 1982.

The German 10-year yield rose from -0.18% to 0.01%, above 0% for the first time since May 2019. Concerns over the Omicron variant started to fade and numerous European countries eased lockdown measures. The Italian 10-year yield increased from 1.18% to 1.37%. The country’s presidential election saw incumbent Sergio Mattarella returned to office, which the market took as a positive outcome and spreads tightened to core markets.

The S&P GSCI Index recorded a positive return in January, driven higher by a sharp increase in energy prices during the month. Energy was the best-performing component of the index during the month, with a sharp rise in the price of natural gas and strong gains for gas oil, heating oil and crude oil. Prices were boosted by supply shortages and political tensions in eastern Europe and the Middle East. 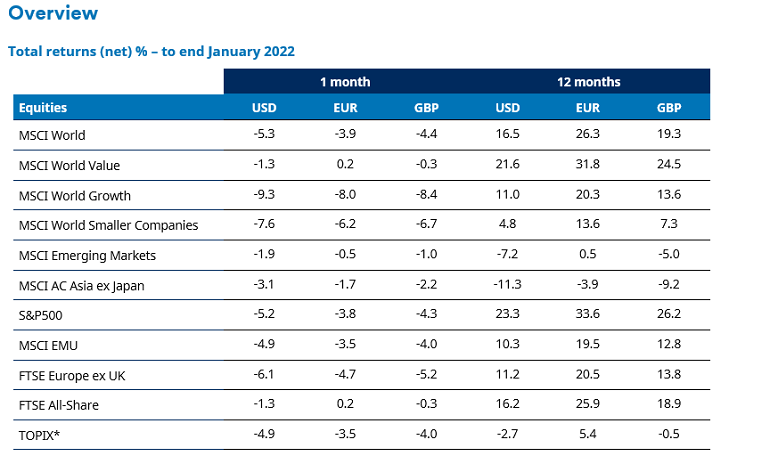 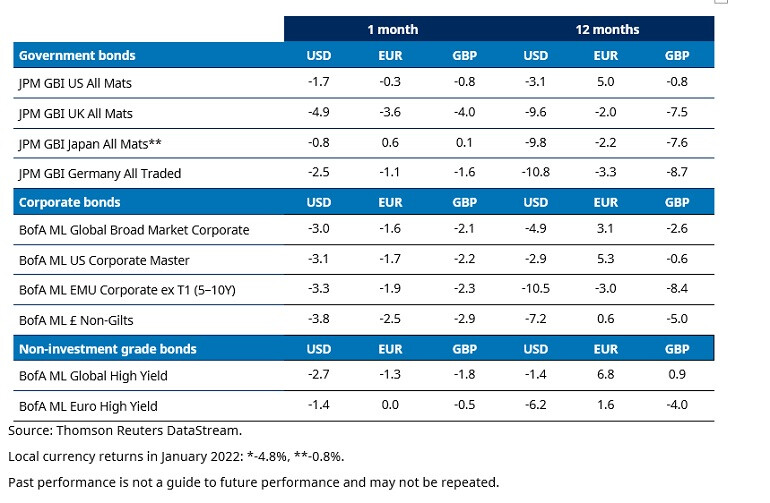 Schroder Investment Management North America Inc. (“SIMNA”) is an SEC registered investment adviser, CRD Number 105820, providing asset management products and services to clients in the US and registered as a Portfolio Manager with the securities regulatory authorities in Canada.  Schroder Fund Advisors LLC (“SFA”) is a wholly-owned subsidiary of SIMNA Inc. and is registered as a limited purpose broker-dealer with FINRA and as an Exempt Market Dealer with the securities regulatory authorities in Canada.  SFA markets certain investment vehicles for which other Schroders entities are investment advisers.