One of the most debated topics for active management in financial markets is whether it’s better to invest in value stocks or growth stocks. Many professional investors usually fall into one camp or the other. While value stocks have outperformed during several periods of history, the MSCI World Value Index has lagged the MSCI World Growth Index by 5.6% p.a. for the last 10 years to December 2020, a significant difference in long-term returns. This trend has led investors to question the wisdom of continued value investing, particularly given the changing landscape of the digital economy. However, as 2020 came to an end, the tide began to turn. Talk of a ‘style rotation’ – a pivot point where the relative performance of one style swaps with the other – is becoming louder as we enter 2021.

What’s the difference between value and growth?

Value and growth investing are two investing styles with varying characteristics, often leading to divergence between the performance of the two styles.

Value stocks refers to stocks of companies that are considered cheap relative to their long-term earnings and growth potential, usually with stable business models that focus on the fundamentals. Value investing focuses on identifying and buying stocks that are trading lower than their actual “fundamental” value.

Growth stocks refers to companies that are expected to grow faster than the rest of their industry sector or the market as a whole and have above-average long-term revenue and/or earning potential. As growing the business is a priority, these companies usually reinvest their earnings in order to expand quickly often at the cost of delaying profitability.

The history of value vs growth

Figure 1 shows the performance of the MSCI World and Russell 2000 Value and Growth Indices over four decade-long periods. In two of these periods (1979-1989 and 1999-2009), value stocks outperformed growth stocks. However, the last decade shows that value significantly underperformed growth, as well as the overall market.

Figure 2 compares relative value/growth performance to US 10-year bond rates. While value outperformed from 1979, there was a clear reversal around the turn of the century.

Figure 1.  Performance of value vs growth by decade (% return p.a.) 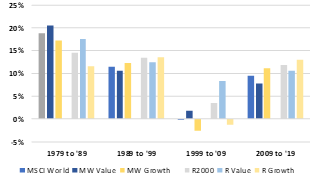 Source: Schroders, Bloomberg.  R2000 represents the Russell 2000 US indices and “R Value”, “R Growth” the respective Value and Growth sub-indices.  Chart shows the relative performance of the Value vs the Growth indices starting at 1979=1.

There are three key take-outs from these charts:

Why have growth stocks outperformed value over the last few years?

The difference in price multiples of growth stocks compared to value stocks is now at historical highs. There are several contributing factors to the continued outperformance of growth stocks:

Why is this different to the dotcom boom?

The last time value stocks lagged growth stocks to this extent was the second half of the 1990s – leading up to the bursting of the dotcom bubble. Both then and now, the relative price/earnings premium of the MSCI World Growth Index vs the MSCI World Value Index was very elevated. Currently, the premium is approaching, though still some 25% below, the peak of 2000/01. Unsurprisingly, many investors are now using the dotcom bubble as a reference to see when we will reach a turning point.

In 1999, the share of technology stocks in the S&P 500 Index peaked at 29%. Today it is 23%, using standard classifications. However, this excludes big-tech companies like Amazon, Facebook, Alphabet and Netflix, which are now classified as Communications or Consumer Discretionary. Adding these companies back to the technology category for comparison purposes takes the share to 32%. There is, however, a key difference between the dotcom bubble and today. All these companies have a credible track record, are highly profitable and there is no questioning their place in the economy.

An alternate comparison may be the performance of the original “Nifty Fifty”. The Nifty Fifty encapsulated the most popular, large-cap growth stocks of the 1960s and 1970s. It included IBM, Walmart, Johnson & Johnson, GE, Polaroid and Coca-Cola. The Nifty Fifty performed exceptionally during the US bull market to 1972 before re-rating in the subsequent bear market that was precipitated by rising interest rates, higher oil prices, the political uncertainty of Watergate and the fall in the US dollar. However, this too is significantly different to what we are seeing today. Today’s large-cap growth stocks are not only from the same industry (technology), but they also have very similar business models – they are all beneficiaries of network effects. More users improve the benefits to a network and ultimately create natural monopolies.

Will there be a value rotation?

Towards the end of last year, value stocks had a brief but strong rally spurred by vaccines.  However, this appears to have stalled as the reality of delivery has set in.  Whilst value could have another uptick on a complete reopening throughout the northern hemisphere Summer, the catalysts required for sustained catch up remain elusive. The premiums embedded in growth stock prices could continue for some time. However, growth is not immune to cyclical slowdowns and it is more sensitive to changes in the cost of capital. New economy sectors will eventually find their place in the world and sectorial shifts will reach some equilibrium, which could cause a value rotation. The tricky part is that we don’t know what the natural market share of the new economy sectors should be, or when we will get there.

For a rotation to be likely, there would probably need to be broad market growth across all sectors.  A reflationary environment, with a weaker USD, would typically provide better conditions for value to perform.  For example, as the global economy improves, oil prices (in USD) and energy sectors may rise in relative terms while the USD weakens. Like the busting of the Nifty Fifty, this could prompt a value rotation as US rates align with other major markets.  However, given central banks are likely to be quite permissive of inflation this cycle, there will less pressure on growth valuations.

For Australian investors, many of the same factors are relevant as for international investors. However, there are two key differences:

While companies like CSL and Cochlear have sustainable businesses, it is not clear that others such as Pro Medicus (34x revenue), Wisetech (11x revenue) and Xero (17x revenue) will grow into the same levels of competitive advantage and industry share as US technology companies have. Either way, the catalysts for rotation are the same. A rotation is more likely to occur when there is a normalisation to higher interest rates and/or material earnings disappointment in the growth sectors.

A word of warning: attempting to time value rotation and being too tactical can be costly. Figure 3 shows the performance of relative value for the 29 years to 2019. The data is split between the full sample (blue bars) and excluding the best 12 months over the entire period (orange bars). The results indicate that nearly all the returns for value stocks were generated in just 3% of the months for major markets. This shows that it is incredibly difficult to try and time the market.

The outlook for value

While many value stocks have underperformed in the market over the last decade, if the last six months of strong value performance tell us anything it’s that judging their performance from the last decade alone may not give a complete picture. Their low price presents an attractive option for a patient, long-term investor with a stable liquidity profile who is prepared to sit through decade-long periods of underperformance.

It is increasingly likely that a rotation will occur at some point, though it is difficult to determine when price multiples for growth stocks will decrease. Given trends across sectors, this could be several years away. This strategy is much more difficult and incorrect timing could mean missing the best periods of performance.

An alternative option could be neutralising the impacts of sectorial changes through style diversification by seeking strategies that better capture value within sectors, regions and capitalisation bands. This is supported by the broad industry shifts to more ESG-based investment policies. While it is too early to measure the long-term impacts of ESG investing, it is reasonable to suspect that this trend is likely to favour growth stocks over more industrial and mining-focused value stocks. This could make the broader underperformance of value susceptible to a second sectorial headwind, which could put off a rotation for even longer.