However, when looking at how many people stuck to their original plans, Australian investors were almost twice as likely to do so than their global counterparts.

The latest findings of Schroders’ Global Investor Study, a landmark annual survey of more than 23,000 investors from around the world, indicated that 34% of Australian investors did not make any changes to their investment portfolio during market volatility in February and March, compared to 19% globally.

The survey, conducted across 32 worldwide locations between 30 April and 15 June 2020, surveyed respondents about their actions following a period of extreme market volatility. This arose as most of the world’s major economies went into lockdown in an effort to limit the Covid-19 pandemic. Between mid-February and mid-March, world stock markets lost approximately one third of their value*.

Almost 80% of respondents globally said they made some changes to their portfolio as a result. Interestingly, a small number - 3% globally and 4% in Australia - were unaware of the turmoil in markets, and so took no action. 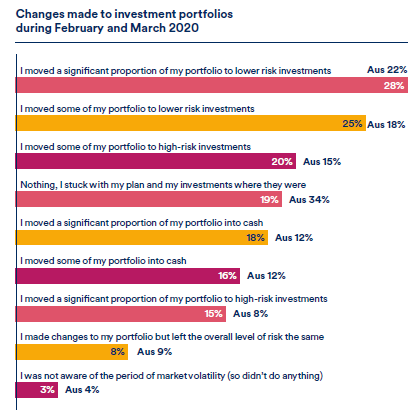 Age or experience – or both – appear to be a factor in how investors respond to volatility. In Australia, Generation X (aged 38 – 50) were the most likely to alter their portfolios, with 78% of this group making changes to their risk profile.

The oldest cohort of investors, those aged 71 and above, were least likely to change tack with only 18% making changes to the level of risk in their portfolios.

When looking at investment behaviour between the sexes, the study found that during times of volatility, Australian women were more likely than Australian men to stick with their investment plans (38% vs 31% respectively).

Investors are broadly optimistic about the pandemic’s negative economic impact

A majority of investors globally believe the economic effects of coronavirus will pass within two years, reflecting an optimism that’s not in line with many countries’ own official forecasts. This is consistent in Australia, with 38% of respondents stating they think the economic impacts will last between one-to-two years.

Despite the recent market disruption, people are still over-optimistic although  the average income from investments they expect to receive over the next 12 months is notably less than last year.

Although the Australian expectation is lower than the 8.8% expected by global investors for the next 12 months, it is still unrealistically high. The natural yield of most investments – such as the dividends paid to shareholders, or interest paid to bondholders – is far lower than 8.8%. And one of the effects of the Covid-19 crisis has been to push these yields even lower.

Many companies have cut or cancelled dividend payments in the aftermath of the pandemic outbreak. Bond yields have also fallen, in part due to central banks cutting interest rates and committing to keeping them at low levels.

While 40% of Australian investors said they were moving a proportion of their portfolio into lower-risk investments, 24% said they had switched to cash.

This provides a valuable snapshot into investors’ attitude to cash. Clearly there are investors who view cash as a safe haven in times of crisis.

For more on the Global Investor Study or to read the full report, click here.

Your quick guide to investment returns