The recent market sell-off has thus far seen two important sources of equity risk significantly underappreciated as investors overly focus on short-term earnings – but that state of affairs is likely to change.

The recent market sell-off has thus far seen two important sources of equity risk significantly underappreciated as investors overly focus on short-term earnings – but that state of affairs is likely to change.

Given the dramatic price falls we have all had to endure of late, it might seem redundant to sound a warning on investment risk. And yet, we believe the wider market is largely neglecting two key sources of equity risk - balance sheet risk and valuation risk.

We are living through unprecedented times as the world battles the threat posed by COVID-19: from a purely financial market perspective, we are also in uncharted territory. 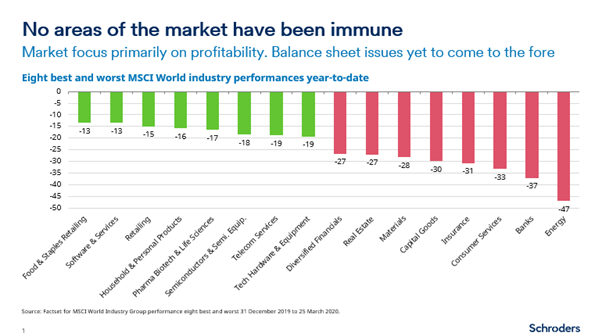 Showing the eight best-performing sectors globally over the year to 25 March on the left and the eight worst performers on the right, this chart highlights where the pain has been concentrated up until  now. Given the rout in oil prices, it is no surprise to see energy as the hardest-hit sector but it is the cyclical areas of the market that have suffered the most. The market has immediately marked down those names it sees as facing the most obvious near-term earnings impact from the widespread economic disruption. This is a deeply one-dimensional view as the fate of companies’ earnings over the coming months is not the biggest risk investors face at this moment.

Although, for some years now, it has largely paid to ignore businesses’ balance sheets and fundamental valuations in favour of earning growth, perceived quality, potential to disrupt and so forth, the market cannot afford to close its eyes indefinitely to these two crucial risks.

Let’s start with balance sheet risk – a consideration that has faded to the back of many investors’ minds in a world of low interest rates. Average levels of borrowing across developed markets are far higher today than they were heading into the global financial crisis in 2007 and 2008 – which means that many businesses are now significantly more vulnerable to an earnings shock than they might otherwise be.

The irony here is that many of the companies hit hardest in the initial round of selling are not necessarily the ones who have been riding high on the wave of cheap debt. And yet the market has apparently not been minded to give them any credit for that. Thus far, balance sheet risk does not seem to have entered the equation – but we do not believe that will last. Given the scale of the economic threat that is now unfolding, we would anticipate a lot of businesses will leave their equity investors vulnerable as a consequence of overly aggressive capital structures and excess leverage.

For the best part of a very long decade, it appeared as if fundamental company valuations simply no longer mattered. The mantra of the bull market that has just come crashing to a halt was do not worry about the price you are paying, just focus on the attributes of businesses.

The following chart is a dramatic illustration of the extremes to which this kind of thinking has driven the levels of valuation dispersion within the market. 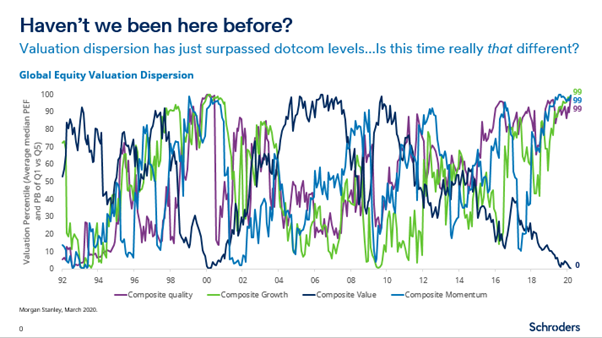 Pay particular attention to the line that has recently plummeted to zero in the bottom right-hand corner – it represents the value style of investing. Simply put, that line hitting zero means the cheapest 20% of the global equity market has never been this cheap relative to the most expensive 20% at any point in the last 30 years.

Even at the height of the dotcom boom we did not reach the levels of valuation dispersion we are seeing today. The market has arguably never been so blind to the underlying valuation of shares.

To flip that point on its head and look at it from the other angle, the other three lines show just how extreme the valuations applied to the highest quality, the highest growth and the highest momentum areas of the market are today. At their 99th percentile, the premium the market is applying to each of these three factors is about as extreme as it has ever been.

When the tide turns

As the above chart shows, we have just surpassed the levels of valuation dispersion at the height of the tech bubble at the turn of the millennium. It is worth reminding ourselves how that particular episode of market history ended. Global equity indices peaked in March 2000 before entering a painful and drawn-out bear market period that did not actually trough until March 2003. During that three-year bear market, global value investors enjoyed one of their best-ever periods of outperformance, with the MSCI Value index beating its MSCI Growth counterpart by some 45%.

Clearly we do not know whether history will repeat itself to that extent but, when the tide turns, it can do so more violently than people realise.

We believe it is clear where the riskiest areas of the market are today and where investors are at most risk of permanent capital loss over the medium term. At the same time, we appreciate value is not an easy strategy to love – indeed it can be very painful at times – but we remain fully convinced it is the right approach for the long run.

And while we acknowledge we may have sounded pretty downbeat in highlighting the significant dangers associated with the current market, we would also stress that, from our perspective as deep-value investors, rather than a risk, this could ultimately prove an incredible opportunity as common sense prevails and value, once again, enjoys its time in the sun.

For more on the Schroder Global Recovery Fund, click here.

How value investing can provide diversification for your clients

Has the internet invalidated reversion to the mean? with Tobias Carlisle