Investors around the world, it seems, are falling into three traps, according to the latest Schroders Global Investor Study 2019

Investors around the world, it seems, are falling into three traps, according to the latest Schroders Global Investor Study 2019

One: Reacting to stock market jitters

Many people believe investing is about trying to time the stock market, however even professional investors struggle to do this consistently.

Schroders’ Global Investor Survey 2019 has shown that fewer than 20% of investors held their nerve and stuck to their initial investment plan in response to stock market volatility in the final three months of 2018. These findings are echoed in the Australian results with 66% of people making changes to their investment portfolio's risk profile during this time.

The survey of more than 25,000 people across 32 locations around the world found that most investors reacted to the stock market falls by moving into lower-risk assets or by cashing in their equity-based investments.

There were indeed some hairy moments in that quarter, with global stocks suffering their worst quarterly falls in seven years at the end of 2018 amid global economic concerns, driven by ongoing trade tensions between the US and China.

But as the graph below shows, stock markets can very swiftly recover. 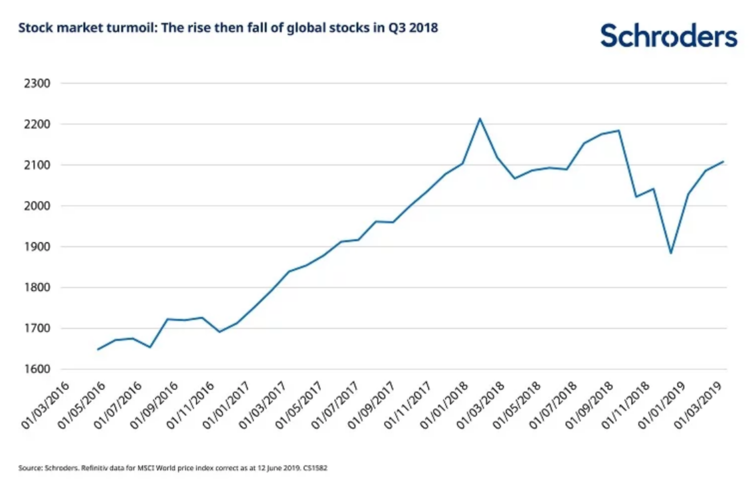 So those who made changes in a panic in late 2018 will have most likely sold at the bottom and lost out on the recovery - the opposite of what most investors want to do.

“No-one likes to lose money so it is not surprising that when markets go down investors feel nervous” Schroders’ Personal Finance Director Claire Walsh said. “Research has repeatedly shown that investors feel the pain of loss far more strongly than the pleasure of gains. That can affect decision-making” she added.

One tactic for those concerned that markets might take a sudden turn for the worse is to drip-feed - in other words putting away a regular monthly amount into your portfolio. When stock market prices are high that monthly payment will buy less; when prices are low, you can stock up on cheap investments. This goes a long way to riding out stock market volatility. As with any investment, it is important to speak with a financial adviser before making any changes to your portfolio.

The golden rule of investing is that it should be for the long term - which is at least five years and possibly even more than 10 years. This gives your investments a period over which most stock-market-based investments should show a positive return.

However, the survey revealed that another common mistake (which is closely related to the first) is that investors tend to take a relatively short-term view of their investments. On average, people stay invested for just 2.6 years before moving their money elsewhere or cashing in.

Here is where younger savers have an advantage. The longer your investing horizon, the more volatility your portolfio can endure. If you are putting money away that you will not need for 30 or 40 years, even big stock market corrections can be seen as buying opportunities. And there is the added benefit of compound interest.

Australian investors had similar return expectations over the next five years with the average annual total return people expect to make from their investments at 10.9%, up from 9.2% in 2018.

The returns include growth in their money, as well as any income paid out in the form of dividends and interest from a variety of investments including cash, bonds, property funds and equities.

Now compare this to recent actualities: in the last five years global stocks, as measured by the MSCI World Index, have returned 6.7% annually. (It is worth noting that the historic performance of markets does not offer a guide to future returns).

Claire Walsh said: “The study reveals that younger people expect higher returns from their investments. That might be partly down to their investment time horizon. In theory, they have more time on their side and therefore could be willing to take more risk knowing that they still have time to recoup any losses. For some they will have only known strong stock market returns and may have been influenced by this in their responses.

Remember, this article is not a recommendation or advice. All investing comes with risk, the value of investments and the income from them may go down as well as up, and investors may not get back the amounts originally invested.