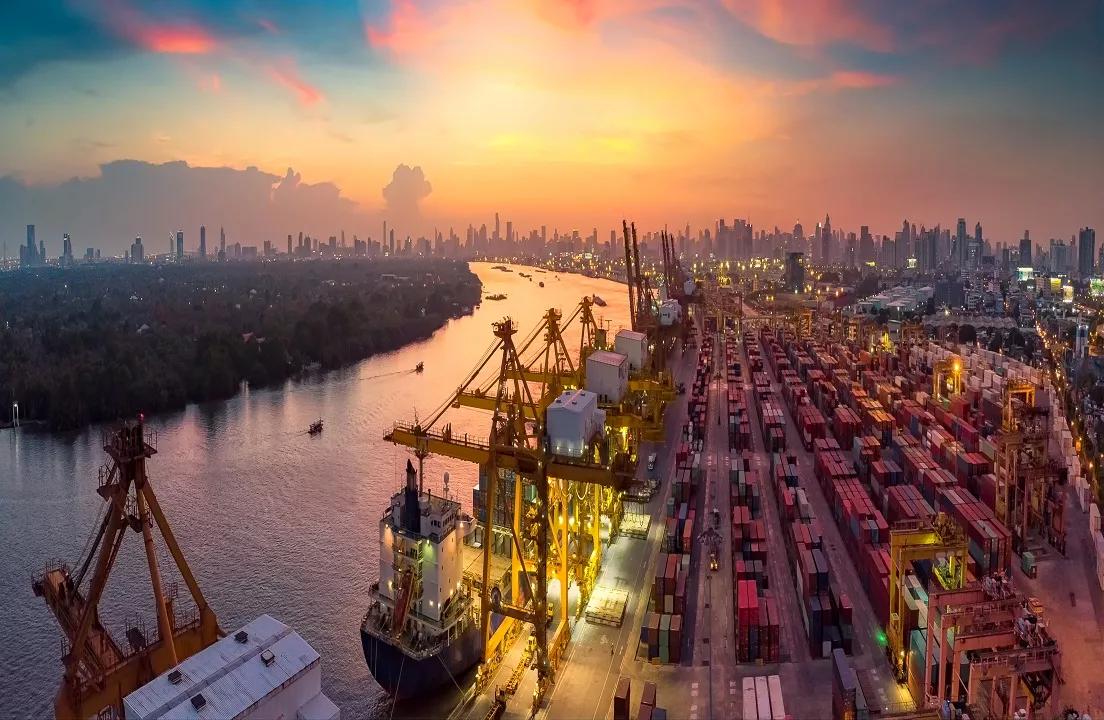 Putin’s invasion of Ukraine led to massive spikes in energy and food costs at a time when post-pandemic supply-chain bottlenecks were already putting substantial pressure on global prices.

Central bankers, mostly with mandates to manage inflation, were faced with the very real prospect of a rampant cost-price spiral. Unusually, they also faced the unenviable task of trying to rein in wage growth expectations at a time when unemployment in most major economies was at extremely low levels. The scope for error was, and still is, great.

Against that backdrop it is unsurprising that most financial assets took a major hit during the year. The protracted era of “free-money”, when interest rates seemed to be on an ever-declining pathway, came to a screeching halt. Having been negative in many countries for several years, real interest rates (the rate of interest after inflation) ballooned as risk premia rose (the amount by which a risky asset is expected to outperform the known return on a risk-free asset).

The effect of higher rates was particularly acute in highly-valued growth areas such as technology, where many former highflying stocks experienced massive drawdowns. Even companies such as Microsoft and Alphabet (the parent company of Google) were not spared. The technology-heavy NASDAQ index entered a bear market (when a stock market experiences a sustained period of falling prices) in May, and the sell-off subsequently extended to the wider market, with every sector and major region down materially by the end of September. The only sector to deliver a positive return was energy.

At the time of writing, headline inflation rates in many countries are still high or increasing. There are legitimate fears that central bank actions may not be sufficient to counter rising wage demands and there is talk of a return to the stagflation (stagnant growth, high inflation) of the 1970s. 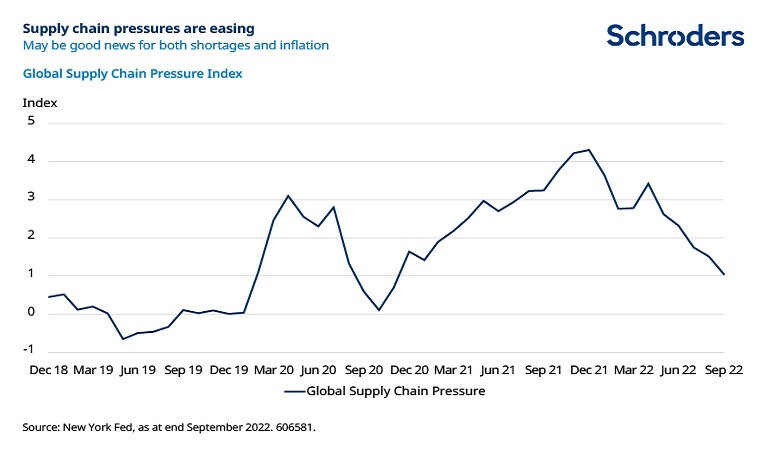 In addition, it is possible that the participation rate, currently at record lows, will increase as non-participants, such as many over-50s, decide to re-enter the workforce. Finally, it is likely that the recent trend toward labour substitution through automation will accelerate meaningfully, particularly given recent technological progress. In short, whilst a return to mass unemployment looks unlikely, it is entirely possible that a rise in vacancies, coupled with a modest increase in the number of participants, caps wage costs in the future.

Ongoing economic slowdown seems inevitable given the above, but fears of a deep recession may prove unfounded, at least in some countries.

With unemployment so low, consumers in are better able to weather higher costs. Government action to provide support with energy bills also cushions that impact too. It is notable that household balance sheets, which benefitted from a considerable build-up of savings during the Covid-19 pandemic, provide a buffer for many consumers (although clearly not sufficiently for the poorest income groups).

Recession or not, earnings estimates will have to come down. One of the interesting features of the current market cycle is that while share prices have collapsed, earnings have so far mostly been remarkably robust. The reason for this is pricing. On both sides of the Atlantic, companies have put through price rises with impunity: Pepsi had +17% positive pricing in the third quarter, for example, while in Europe Louis Vuitton and Nestle both had double-digit price uplifts with little immediate impact on volumes.

In these specific cases revenues may well hold up, since consumers appear willing to pay up for premium products. However, for many companies it is only a matter of time before negative elasticity kicks in and demand starts to fall. Early indications from the likes of Amazon and Target in the US, or M&S, H&M and Primark in Europe suggest that consumers are already cutting their spending. Revenue and margins (excluding energy companies) look likely to fall in 2023, creating a proper earnings downgrade cycle that is yet to be fully reflected. 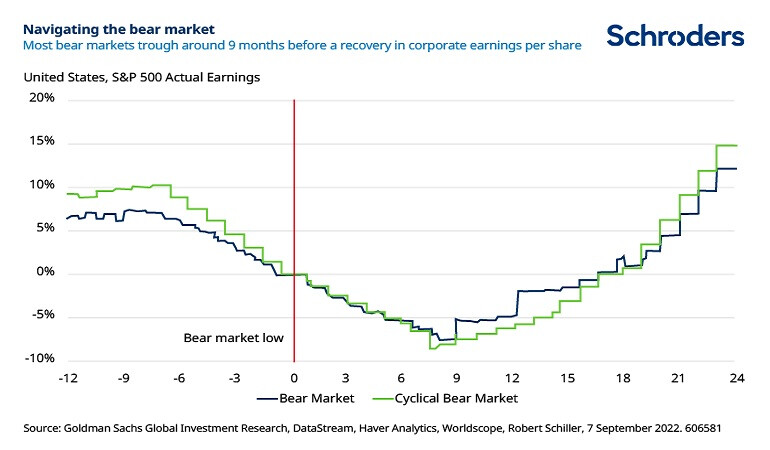 Consensus S&P 500 earnings per share of $225 and $235 still look somewhat high, and we expect these to be revised down steadily over the coming months, with the trough to occur in the third quarter of 2023. But stock markets always look ahead, typically discounting a trough in earnings six to nine months ahead of the actual trough. That suggests that the recent bounce in global equity markets (the Dow index had its best month since 1976 in October) was not without logic, although we do believe the recent rally to be something of a false dawn. 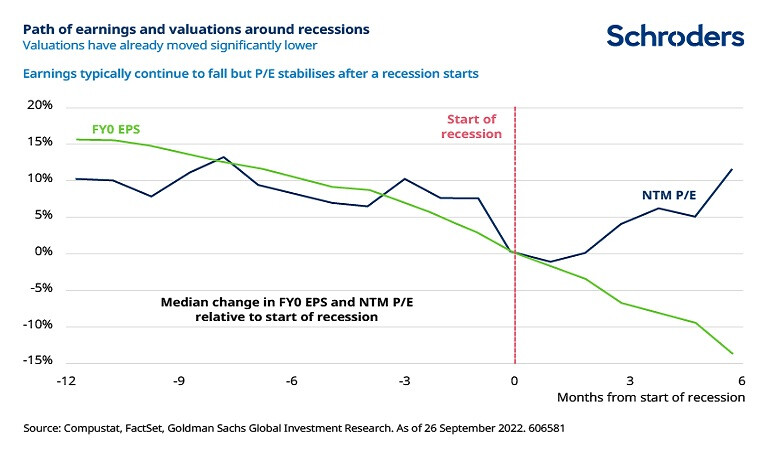 We haven’t dwelt on ongoing geopolitical risks, such as further escalation in Ukraine, the possibility of further reduction in Russia’s gas supply to Europe, or China’s stance on Taiwan. These are potential “Black Swan” events that are binary in nature and impossible to predict with any certainty. Any one of these possibilities would be extremely bad for global markets. One must hope that common sense will prevail.

Regardless though, the events of the past year will only serve to strengthen certain trends that were already apparent before the current crisis. Security – national security, energy security, food security, cyber security (to name but a few) must now be considerably higher on government and corporate agendas than in the past decade. Russia’s exploits have proven that energy dependence on an erratic partner can be disastrous. China is likely to remain a much more rational, measured player than Russia, but President Xi’s agenda is clearly expansionist.