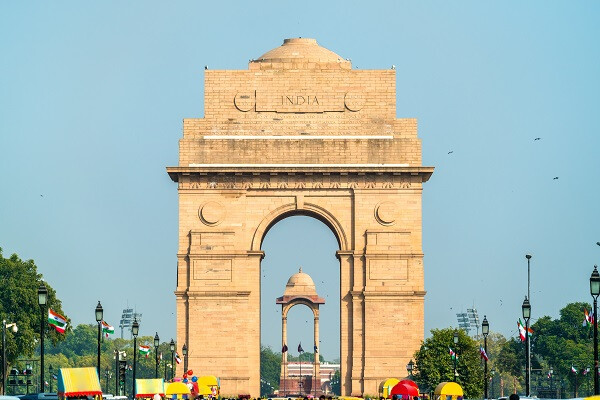 In this Foresight paper, we argue that India offers an opportunity for investors because of its unique characteristics.

On the macroeconomic side, India is on the course to become the most populous country in the world. Its relatively young population and low urbanisation rate have the potential to spur economic growth for decades.

India’s large and liquid stock market, spread across the market cap range, is well suited for an active strategy. Indian stocks also have the potential to improve diversification in global equity portfolios, because of their lower correlation to global equities.

Taking account these benefits, we argue that investors should consider a satellite allocation to India, in addition to a broad global emerging markets strategy. Such an allocation would better capture the opportunity in India.

Read more: The case for a standalone India allocation

The state of India’s growth story

India’s economic heft, on the other hand, has not quite kept up with its growing population. This is evident in India’s lack of progress in economic convergence, as Schroders’s Emerging Markets Strategist, Nicholas Field wrote in 2021.

A lack of investment, especially in infrastructure, has hindered of India’s economic development. This has prevented India from following the classical, export heavy convergence model that has propelled growth in current and former emerging markets (EM) countries.

However, the latest developments indicate that India’s government is taking the right steps to resolve at least some these issues, as it intends to significantly boost infrastructure investment. The plans are ambitious and include 25,000 kilometres of new highways and 100 new cargo terminals.

It remains to be seen how successful the government’s efforts are in boosting economic growth. Regardless of the outcome though, India has a powerful demographic trend on its side.

India’s working age population is projected to peak in the 2030s and fall only slightly from there. Hence, India’s economy could sustain a period of elevated growth, as the supply of labour rises. The economic potential arising from favourable shifts in the population structure is often referred as a demographic dividend. 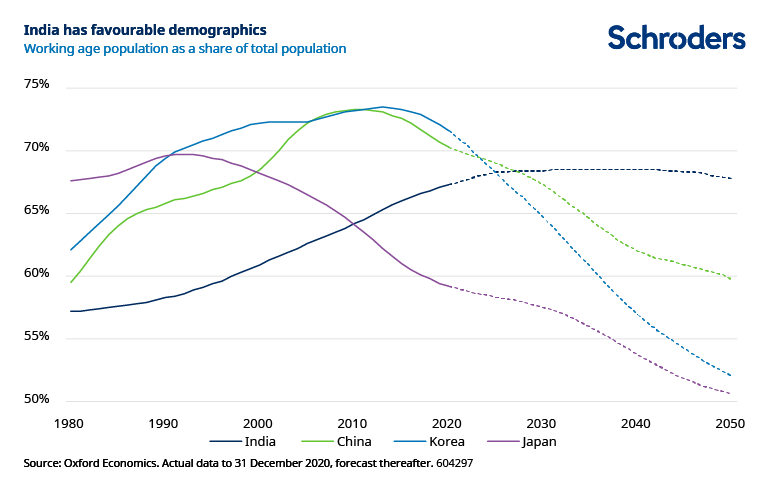 Why has India made so little progress with urbanisation? Lack of infrastructure investment, as highlighted above, is at least partially to blame here.

However, should investment in infrastructure increase, as is currently planned, urbanisation could gain momentum and give rise to demand for various of goods and services in India. 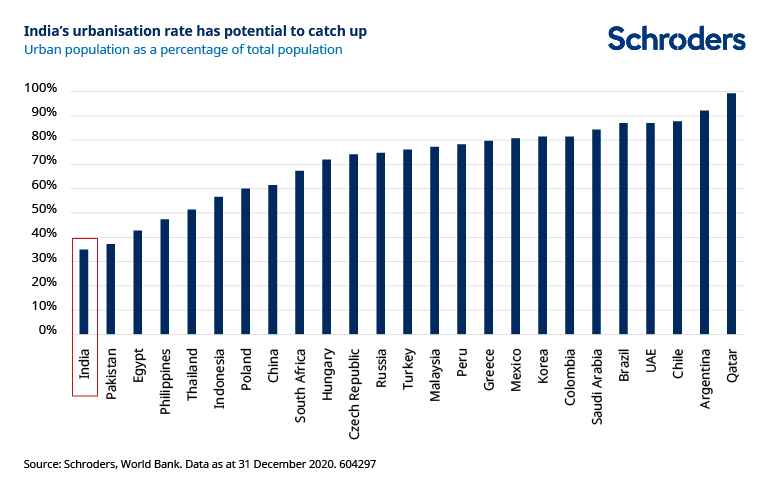 Amidst the efforts to realised the full economic potential, a digital revolution has been taking place in India. Specifically, internet and smart phone usage has increased rapidly, with 50% of India’s population now having internet access.

In a country where access to toilets was a major issue until recently, the adoption of mobile services has been a remarkable force of change.

As a result, new technology companies have burst onto the scene. These companies operate business models that previously did not exist in India, ranging from food discovery and delivery to online vehicle sales.

For investors, the payoff from this transformation has already been substantial. In 2021 alone, 44 Indian start-up companies achieved unicorn status; defined as start-up companies with a value in excess of $1 billion. This is more than in the previous ten years combined.

India’s progress in economic convergence has been underwhelming, as we highlighted above. However, this track record is not all reflected in the performance of India’s stock market.

The figure below shows that across four time frames, India has outperformed both China and the broad EM, delivering a return of 14% annualised since 2002. This highlights that stock market performance is not always tethered to the economy. 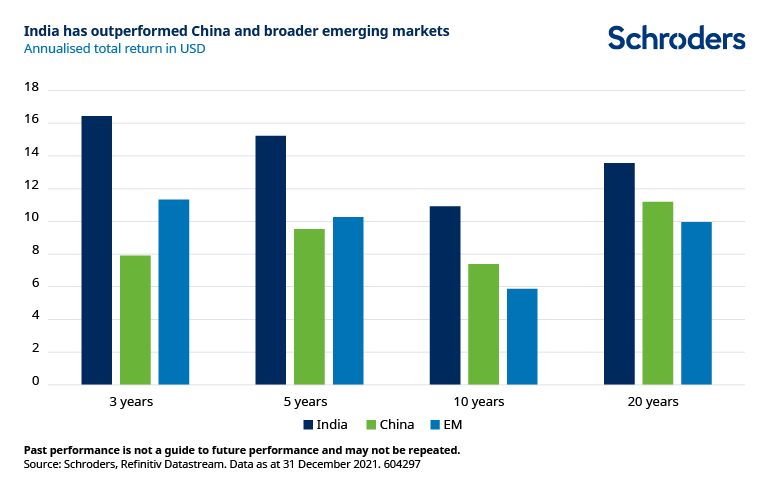 In addition to strong historical performance, there are a number of characteristic that make India unique among its global peers:

Indian stocks have been included in major EM benchmarks for some time. However, the exposure investors get through these indices might not necessarily be optimal.

The MSCI India Index is the fourth largest constituent of the MSCI Emerging Markets Index at 12% weight, as at 28 February 2022. Even though the exposure to India via the broad EM index is not insignificant, it is heavily skewed towards selected large-cap stocks.

In addition, not all Indian stocks, even the largest ones, are included in major benchmark indices because of limits on  foreign ownership.

The benefits of an additional India allocation

We believe that India warrants a more central role within the broad EM strategy. Crucially, India is one of the few, if not the only market in EM that can offer similar breadth and diversification as China.

Below, we have highlighted the key benefits of an additional India allocation.

In the broad asset allocation context, Indian equities have added diversification to international equity portfolios, as they have lower correlation with global equities than broad EM equities. Furthermore, the diversification benefit increases when moving down the market cap spectrum. 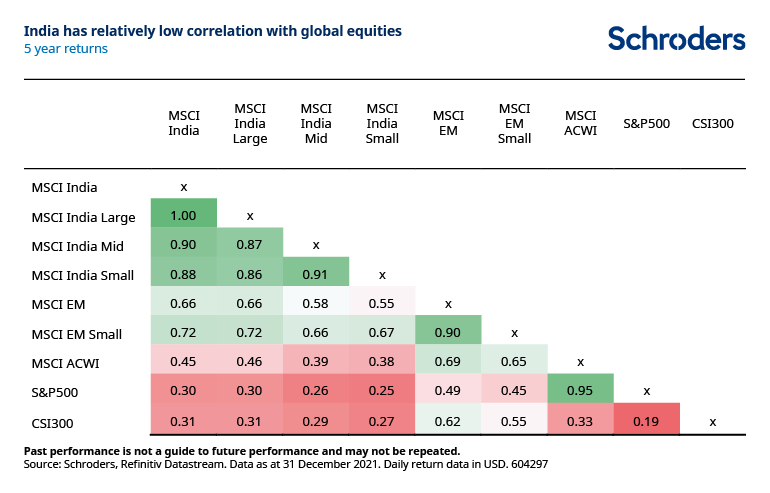 The figure below shows the percentage of active equity funds beating their benchmark (blue bars) and the MSCI India Index (green bars), over a three year period, for offshore and domestic funds.

The performance of offshore and domestic large-cap India equity funds has not been stellar. However, active performance improves significantly when moving down the market cap spectrum and does not only reflect the fact that smaller stocks in general have outperformed larger ones in India. 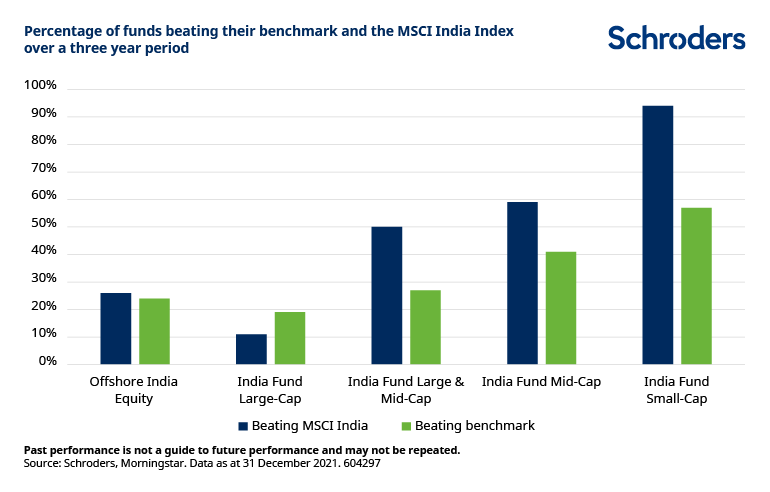 A passive approach has not delivered in India

While active managers have shown varying degrees of success in India, a passive approach, on the other hand, has missed the mark by a distance.

The figure below shows the performance of various equity ETFs in both EM and developed markets (DM). In DM, ETFs have done fairly good job in tracking the market. In EM, the picture is quite different. All the ETFs have lagged their benchmarks. Given significantly higher fees of these ETFs compared to DM ETFs, this is perhaps not surprising.

Looking at India, the underperformance has been very high. Over the last three and five year periods, the average India ETF has underperformed by -1.9% and -1.8% per annum respectively, pointing at the high cost of passive index replication in India. 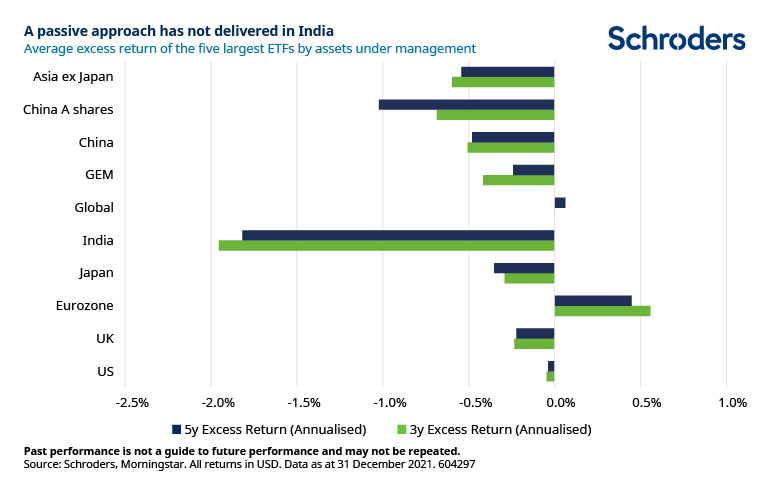 Please ensure you read our legal important information before visiting the rest of our website.