The world could be heading for a dystopian or booming future thanks to the incredible advances being made in automation. We look at the robot age and what it might mean for investors.

Reuters, the news agency, has recently revealed that as many as 400 of its news stories are written every day by robots. And if that wasn’t depressing enough for journalists, the really bad news is that the feedback from clients is that much of the robotic output is more readable than the production of human writers.

Meanwhile, IBM has developed an artificial intelligence “engine” which is beating human oncology specialists in its diagnosis and treatment of cancer in nearly one in three cases.

Is the future bright or bleak?

With developments like these, it isn’t hard to paint a bleak picture of further breathtaking advances in automation creating an increasingly divided society, where a so-called “second machine age” prompts mass displacement of labour accompanied by an increasingly wealthy robot-owning class. Yet the history of technological change offers a decidedly more sanguine prognosis.

In our latest research on this subject, we are optimistic that, if handled well, the rise of the robots will create neither widespread joblessness nor rampant inequality in the long term, despite some unavoidable transitional costs.

The effects so far

Many would argue that the ill effects of automation are already becoming evident in the US, where recent decades have seen a “hollowing out” of manufacturing employment, driven by technology and globalisation. Now automation is also making rapid progress in both low-skilled services roles and areas that have traditionally been the preserve of highly-skilled white-collar workers (as the Reuters and IBM examples highlight).

The resultant rise in inequality could dampen consumer demand, put pressure on government finances, and even precipitate a further lurch towards populism in the developed world. 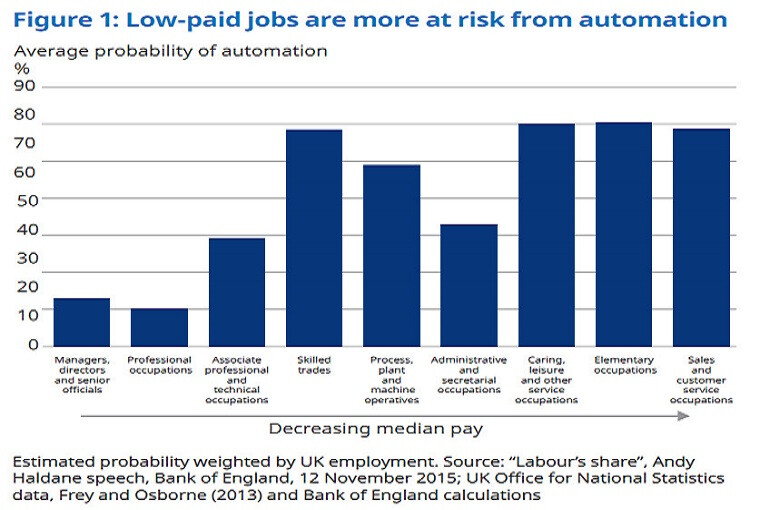 However, the history of technological change offers plenty of hope. Over the course of the 20th century, not only has technology led to huge productivity improvements that raised living standards for all, it has almost certainly created more jobs than it has destroyed. Moreover, an automation revolution should bring a much-needed boost to productivity, raising trend growth rates.

Such a fillip would not only help offset recent poor productivity growth in many countries, but also the downward pressure on growth from ageing populations. This is particularly true in developed countries, which are more likely to have the resources and expertise to embrace the automation technology.

If this outlook proves accurate, it could challenge the conventional wisdom that developing countries with large, young populations have significant demographic advantages over developed economies.

We accept, however, that firm conclusions are difficult to make. Given the huge uncertainties, we prefer to look at a range of potential outcomes between two extremes: “techno-dystopia”, in which high unemployment and rising inequality prevail, and “positive productivity shock”, where automation facilitates a widely-distributed productivity boom.

Of course, sequencing is important, and we may shift closer to “techno-dystopia” before policymakers and labour markets have time to adapt.

From an investment perspective, techno-dystopia represents a world where many of the current issues facing the global economy – weak demand, subdued inflation, low wage growth and inequality – are intensified. With inflation remaining permanently lower, developed world bond yields would likely fall further. This is because the premium that bond investors typically demand to compensate them for the risk of inflation would be greatly reduced.

If the future is brighter, and automation helps the global economy emerge from its current malaise, developed bond yields should finally break out upward from their five-year range, and improved sentiment could even drive buoyant, demand-driven, inflation. In a sense that would represent an amplification of the “reflation trade” witnessed following the election of President Trump.

This should be a very good environment for developed world risk assets, with commodities and inflation-protected assets also doing well. It would certainly warrant an underweight (or short) position in developed world bonds.

To determine which way the wind is blowing, investors will need to keep a close eye on how policymakers and the beneficiaries of automation rise to the challenge of spreading its financial benefits more widely and be ready to act accordingly. 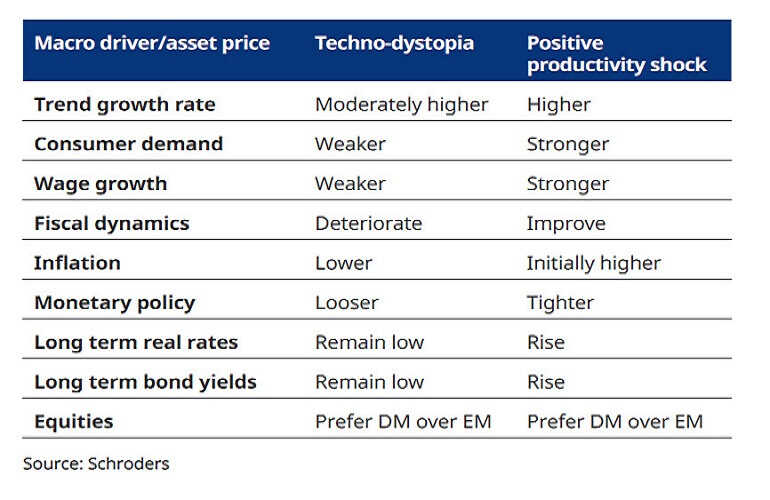