The UK’s current problems are not unique, and there may be opportunities despite the pervading mood of gloom. 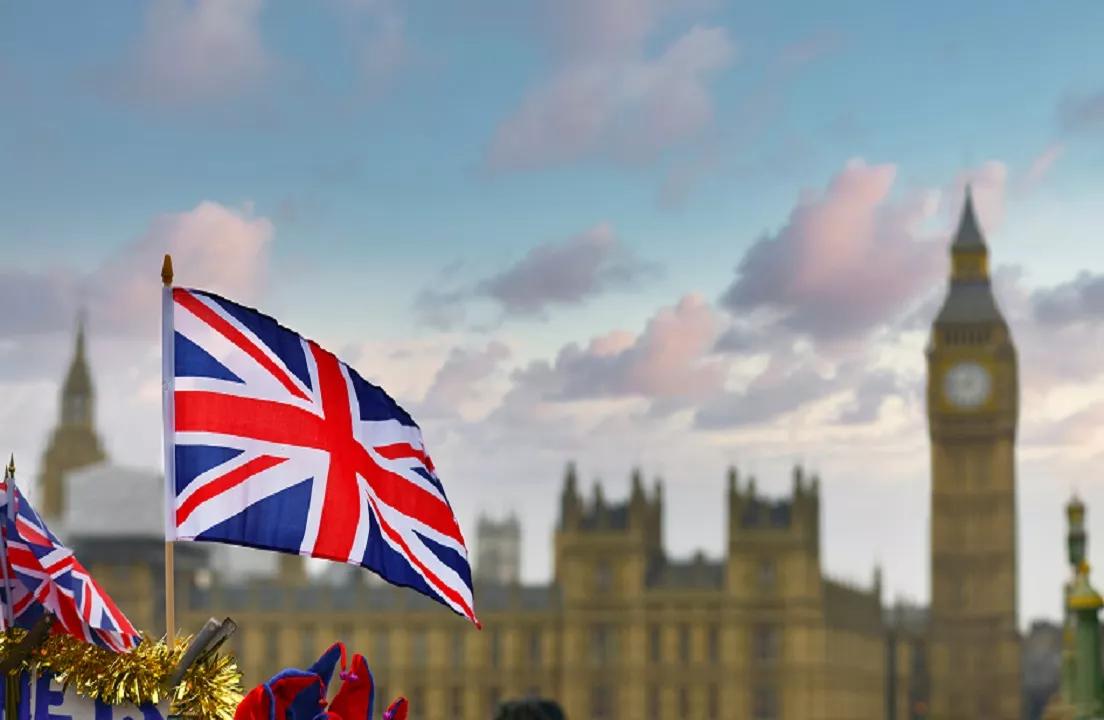 How worried should we be about sterling?

It’s important to put the pound’s weakness into context of a global dollar crisis. The US dollar has been extremely strong in 2022 versus nearly all other major currencies (e.g. euro, Japanese yen, Swedish krona, Norwegian krone and the Australian dollar).

This is due to two factors. Firstly, because of steep interest rate rises from the Federal Reserve and secondly the flight to safe assets given the energy crisis and uncertainty around the Russia-Ukraine conflict. As the world’s reserve currency, the dollar has benefited here.

US energy and gasoline prices have fallen from their May/June peaks. In Europe, gas prices continued to rise steeply through the summer due to restricted supplies of gas coming from Russia through the Nordstream 1 pipeline. Additionally, we’ve seen fears that Europe would lack sufficient supplies for the winter.

European prices have fallen sharply in recent week, but even still the declines have been more muted than in the US due to energy being priced in US dollars and the euro and pound being weak against the US currency.

Since August 2022 the pound has been particularly weak, even versus the euro, but remains in the trading range of 1.10 to 1.20 euros. This suggests to us that the energy crisis is something we have in common – there is no sterling exceptionalism here.

At the time of the mini-budget announcement on Friday 23 September, sterling traded at $1.12. It has since been particularly volatile – with a fall to a record low of $1.03 as the markets opened after the weekend and recovering to $1.10 on Thursday.

Low valuations of UK companies combined with the strength of the US dollar versus sterling could lead to American buyers taking advantage.

We’ve seen a significant market fall-out over the past week. This has followed a raft of government policy announcementsand numerous commentators (including the IMF and the US government) criticising both the new chancellor Kwasi Kwarteng and the approach of the new prime minister. We believe this is unfortunate. Our view is that the actual tax cuts announced were not excessive, seeing as the UK’s debt/GDP ratio is one of the lowest in Europe. What’s more, the risks with the open-ended liability of energy bills may be less than many expect, given gas prices have halved from their peaks in recent weeks.

Kwasi Kwarteng’s credibility has suffered from the lack of backing from an Office for Budget Responsibility (OBR) forecast, and limited information on how the cuts would be funded, which we think will come in the coming weeks. The chancellor’s comments that “there is more to come” over the weekend exacerbated the market’s fears. A mechanism to clawback some of the cost of the energy subsidy in household bills over 10-to-15 years would go a long way to shore up confidence.

Chart: sterling has fallen further vs the US dollar than the euro 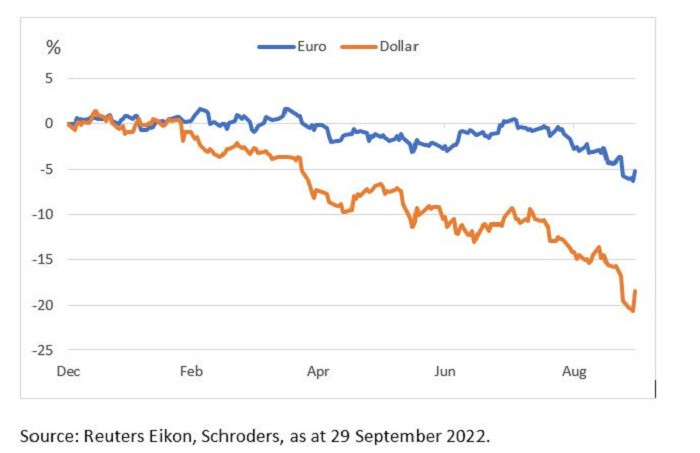 Read more here: Weakening pound: what does it mean for UK interest rates and UK assets?

Who might be the winners and losers from even higher rate expectations?

Higher interest rates should naturally favour companies with strong balance sheets. They should also favour those companies with a significant proportion of their debt at fixed rates, rather than floating ones.

In general, this favours larger companies which have the ability to access alternative pools of finance such as corporate bonds, rather than solely being reliant upon bank loans.

However, approximately one third of UK homeowners are mortgage-free and may benefit from a rise in the interest payable on their savings. As a result, luxury goods companies could be net beneficiaries of increased wealth.

Industrial companies with significant technical customer support or service should fare better than those more dependent upon sales of capital equipment.

Higher interest rates are typically associated with higher inflation. Higher inflation should ultimately benefit regulated utility companies, who will see a significant increase in the value of their regulated asset bases at the next review from which the regulators allow them to achieve an acceptable return. However, in the short-term, higher inflation will increase operational costs and rising interest rates will increase the cost of servicing debt compared with previous expectations. As a result, the long-term benefit for regulated utilities is partially offset by some short-term headwinds.

Rising interest rates are broadly positive for the UK banking sector. Higher rates will potentially materially boost income, or net interest income, NII, which is the difference between what banks pay on deposits and what they earn from loans.

If, however, higher interest rates drive the economy into recession bad debts could also have a materially negative impact on the value of the banks’ loans, requiring some of them to be written off and impacting their overall ‘asset quality’. The recent dramatic change in expectations for UK base rates could be very beneficial to the banks’ NII over time, enough to raise earnings some 150–200% versus current consensus estimates for 2024.

These potential benefits come at a time when valuations of the banks are discounting a lot of bad news, with their shares very lowly rated. Meanwhile, following Covid the banks are in good financial shape with sufficient buffers to absorb significant write-offs, barring an incredibly deep recession. Surging NII, however, could draw in competitors chipping away at the potential gains, or become the subject of scrutiny, prompting the government to impose additional taxes on banking profits.

What do higher gilt yields mean for UK equities?

Gilt yields have risen sharply over the year from particularly low levels, as have US and European bond yields. Gilt moves have been particularly extreme in the past week, which we think has been an overreaction to recent developments.

The most direct way in which companies are impacted by higher gilt yields relates to levels of debt and the rising costs of this debt. The cost of refinancing has increased materially and there is less of it to go around. This is obviously a major issue for companies with high levels of debt, especially if it needs to be refinanced over the next 12 months, and in particular can be material in some sectors such as retail, hospitality and transport.

If a company looks weak already, any refinancing and increase in interest and/or lease costs could potentially trigger a breach of debt covenants, which are the terms and conditions the debtor commits to as part of a lending agreement. We would consider these companies most at risk and urge caution favouring quality companies, with the ultimate protection of having cash on the balance sheet.

How attractive are dividend yields?

It’s important to note that 45% of UK dividends are paid from US dollar denominated earnings, so dividends are aided by weak sterling.

However, recent falls in bond prices means yields on UK gilts are now higher than the UK’s equity dividend yield. With the 10 year gilt yield at around 4.5% and 2-year gilt yield at 4.6%, gilts arguably have the best Sharpe ratio (a measure of risk-adjusted return) in the UK at the moment.

The counter to this is the cheapness of the UK stock market and the potential capital returns. Additionally, any capital returns could be aided by special dividends and buybacks as a consequence of higher earnings from currency weakness.

The UK market benefits from its “short duration”

The past year has shown, with rates rising here and globally, the UK (and the FTSE 100 in particular) has benefitted by having a much lower proportion of growth stocks than other markets. That means that UK companies generate a larger share of their cash flows in the near future, or are short duration. The UK therefore has less duration risk (sensitivity to rising bond yields) than other regions, particularly versus the US. If gilt yields continue to increase further (and thus discount rates, used to determine the present value of future cash flows), then the UK’s bias to more value and short duration stocks will continue to be a benefit.

How are we changing our positioning in UK equities?

A common theme across all our UK equities fund managers is low turnover, and not making hasty allocation calls. Shifting positioning on a top-down call and getting this wrong can severely impact judgement going forward and is not where we add value as stock-pickers. One needs to take a long-term perspective and to look through the panic in markets for the opportunities on a three-to-five year view, but with a laser focus on balance sheet strength for existing and future holdings.

It’s also worth noting that small and mid cap companies tend to rally early and most sharply relative to other areas of the market, as we discussed here.