Why 70% of people keep investing after retirement

More than two-thirds of people plan to continue investing even in retirement, according to a major global study.

For many, the idea of retirement means getting away from the stresses of everyday life. But with livings costs rising and interest rates low, people need to think about how to generate extra income from their savings in retirement.

A major new study has found that 70% of people not yet retired plan to keep investing after they retire. On average they will dedicate 13.3% of their retirement savings to continued investing.

For those retired, the figure is even higher. Retirees said they were allocating nearly a fifth (19.1%) of their pension savings to investments.

Those were the findings of the Schroders Global Investor Study (GIS) 2018, which surveyed more than 22,000 investors across 30 countries.

The proportions of retirement savings retained for investing varied regionally. In Asia, retirees allocated the highest average of 19.5% to investments. Retired people in the Americas kept 18.6% invested, slightly ahead of Europe where the figure was 18.2%.

Retired South Africans said they invested the largest proportion of their savings. It was also the country which had the biggest disparity (16.9%) between the amount retired people were investing, at 26.6%, and the amount non-retired people thought they would invest, at 9.7%.

Lesley-Ann Morgan, Head of Retirement at Schroders, said: “The survey suggests retirees have to think far more about making their savings work for them in retirement than perhaps they did previously.

“There are several reasons that may explain why retirees have higher levels of investment than those still in work expect. In many countries, lower interest rates and rising inflation has reduced the value of income that bank accounts and guaranteed products can offer. People are also living longer, giving them more years in retirement that need to be funded.

“Our study shows that retirees have adapted to this reality by keeping more of their savings invested. For those nearing retirement, it shows that they may need to reconsider how they invest after retirement to meet their income needs.” 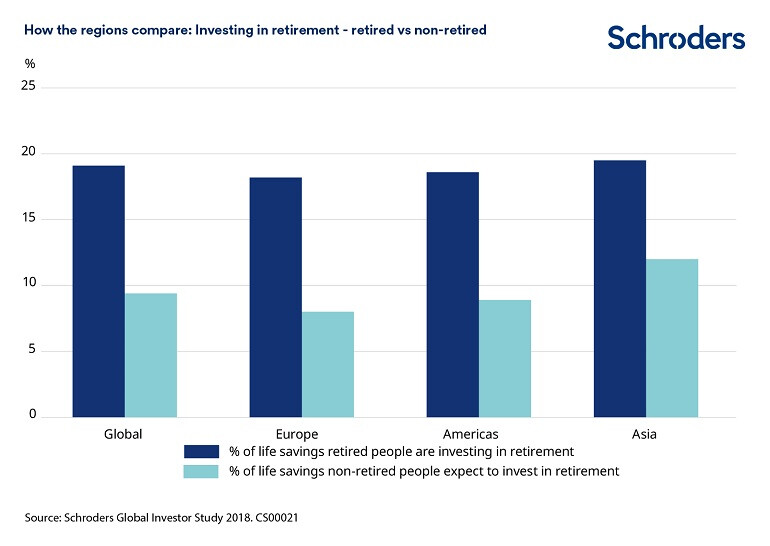 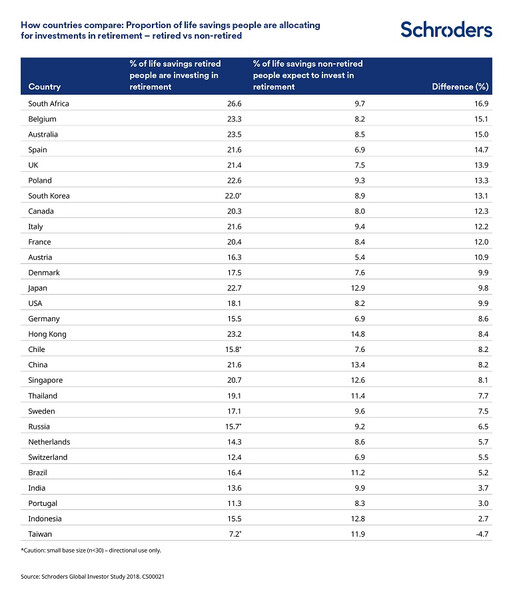 The effects of higher living costs and low interest rates

Higher than expected living costs and lower rates and returns could see many people having to juggle their budgets or to make adjustments to their retirement aspirations.

Regionally, retired people in the Americas and Europe were allocating more of their retirement savings, 52.5% and 50% respectively, to living costs, but it was lower in Asia (38%). 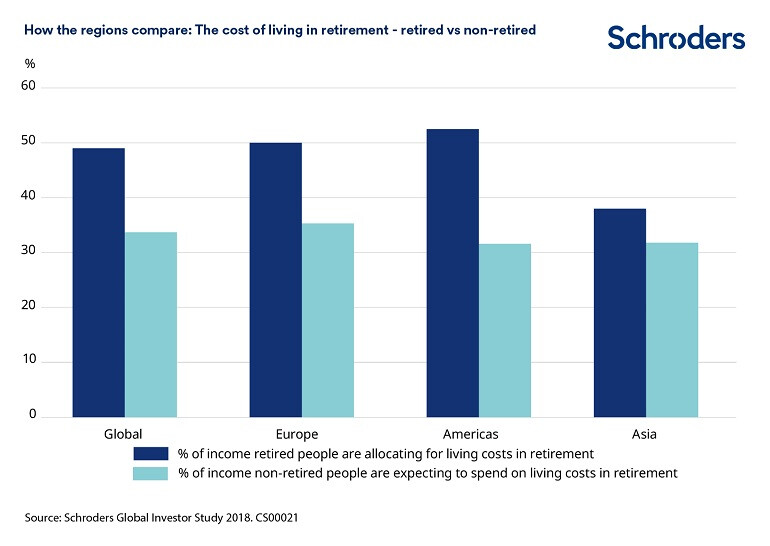 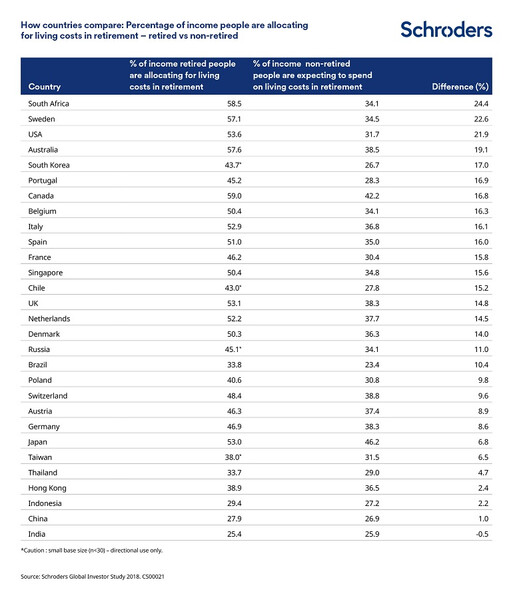 How retirement is changing

A potential shortfall in savings rates may mean investors need to adjust their retirement expectations, the GIS results suggest.

For instance, those yet to retire said they expected to spend on average 25.6% of their retirement savings on travel and hobbies. Currently, retired people said they are spending just 22.3%.

It may have been a decade ago, but the effects of the global financial crisis are still being felt. While the global economy has recovered from the recession that followed, many of the measures brought in to prevent the collapse of the economy remain in place. That has had a big impact on the cost of living and the return on savings.

Read more:  Three scenarios that show how quickly inflation can erode your wealth

For instance, in many countries the cost of living (inflation) is rising at a faster rate than the interest available from savings in a bank account. This is a particular problem for retirees who, in the past, tended to partly rely on the income provided by these savings. Now, whether they are just looking to supplement their retirement income or thinking of leaving some money behind, keeping more invested might be their best option.

Investment returns affect how much income retirement savings can generate. While history does not provide guidance for future returns, it offers food for thought. An arbitrary rule of thumb in the US, coined by adviser William Bengen, has been that 4% was the ideal amount to withdraw from a pension – starting at a withdrawal rate of $4,000 from a $100,000 portfolio and rising with inflation. Withdrawing any more runs the risk of savings running dry within 30 years.

But this rule of thumb was established in the mid-1990s when the investment environment was very different from today. With lower returns and longer lifespans, reassessing this rule may be necessary and a lower figure than the 4% rule may be more appropriate, depending on your own financial circumstances.

Schroders commissioned Research Plus Ltd to conduct, between 20th March and 23rd April 2018, an independent online study of over 22,000 people in 30 countries around the world, including Australia, Brazil, Canada, China, France, Germany, India, Italy, Japan, the Netherlands, Spain, UAE, the UK and the US. This research defines “people” as those who will be investing at least €10,000 (or the equivalent) in the next 12 months and who have made changes to their investments within the last 10 years.