Noise around US-China trade tensions and the moderation of growth in China are among the factors that have caused broad declines in financial asset prices. Asia has come in for harsh treatment with declines in regional equity markets leaving them close to bear market territory, while a number of currencies in the region have been pummelled.

Asian US dollar (USD) denominated corporate bond markets too have felt the hit. This has resulted in one of the most enticing entry points to the market for several years. USD denominated bond yields have reached attractive levels both relative to other markets and particularly in the context of the overall credit quality of the region, both at a country and company level.

Additionally, the region displays broadly positive economic fundamentals. China’s ongoing growth moderation can often dominate headlines, but Asia as a whole remains one of the highest growth regions in the world, and most of the countries have solid, even enviable public finances.

Taking a simple look at valuations, Asian investment grade (IG) corporate bonds in aggregate offer better credit spreads than either US IG or euro IG. As at the end of the 31 December 2018, the spread (the difference between yields of two different bonds or bond markets of similar maturity) on the Asia IG Index was 183 basis points (bps), with duration of 4.8 years. This compared to a spread of 159bps and duration of 6.9 years for the US IG market.

Manu George, senior investment director, Asian fixed income, said: “Given that Asia and US dollar IG have the same average credit rating, these discrepancies in yield, spread and interest rate risk would appear to reflect a degree of mispricing in the market.” 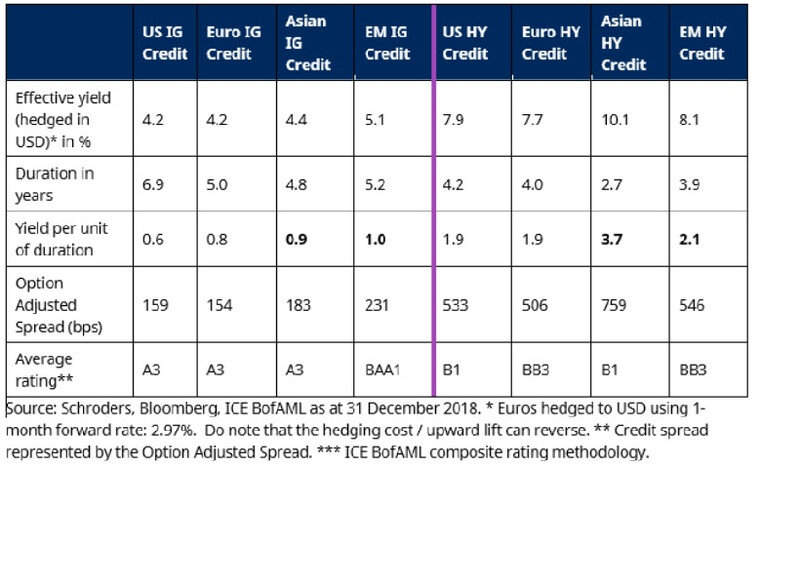 Duration reflects a bond’s sensitivity to changes in interest rates or yields. The level of duration is effectively the percentage change, up or down, in the price of a bond per 1% move in the yield, with prices and yields moving inversely of one another.

Investors can earn greater yield on EM IG corporates, taken as a whole, but for with higher interest rate risk. The average rating on EM credit is below that of Asian credit. A lower rating reflects lower overall fundamental quality and implies a higher risk of default.

These price discrepancies are also pronounced in the high yield (HY) market where Asia yields over 10% (US dollar terms), a spread of 759bps, while US dollar HY, which has the same average credit rating, yields 7.9% for a spread of 533bps. By the same measures, Asian HY is also more attractively valued than EM HY, which yields 8.1%, with a spread of 546bps and 2.1 years duration, though with a similar composite credit rating.

Asian investment grade credit fundamentals continue to improve even through all the noise around the Sino-US trade war with leverage levels in a stronger place than US and euro credit. This should insulate the Asian high grade universe from future shocks and volatile macroeconomic conditions. 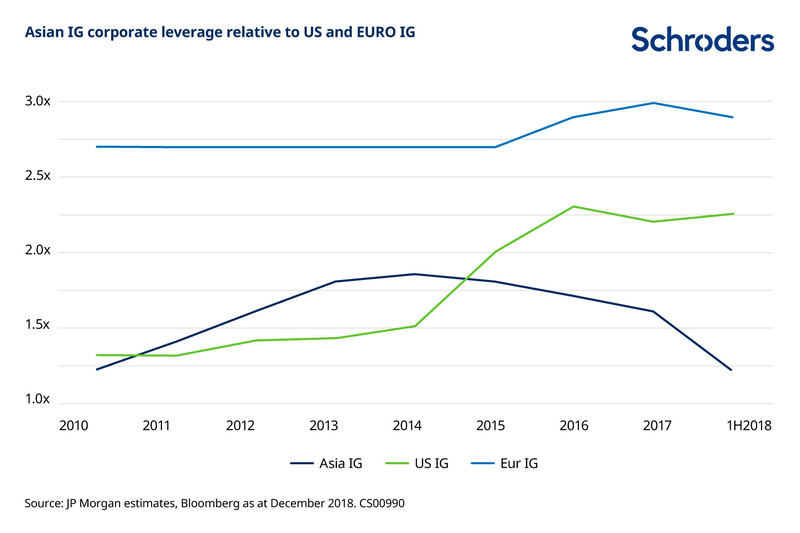 Another attractive aspect is the yield on offer on shorter-dated Asian bonds, underlining the relatively low-risk nature of the opportunity. Shorter-dated bonds are seen as lower risk as investing money for a shorter period of time gives the investor greater visibility over the prospect of being repaid and the probability of an unforeseen negative event is reduced. 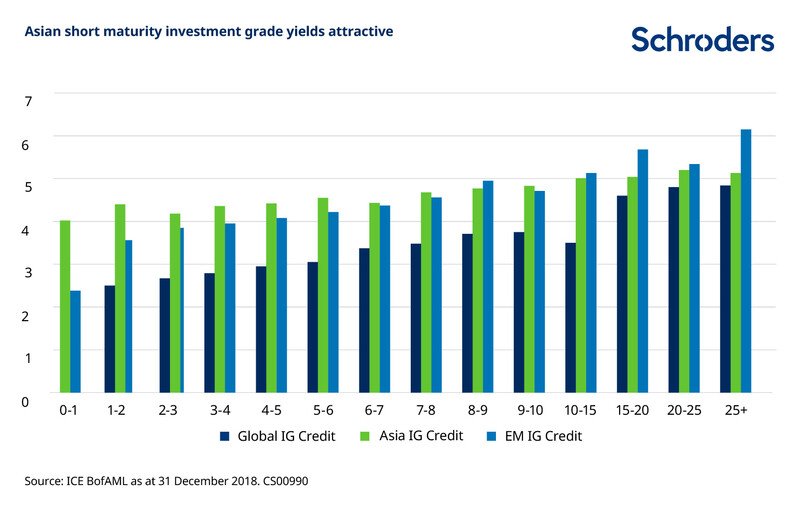 The average credit quality in the Asian bond universe is typically higher than the other EM regions – Asian countries are overall solidly IG-rated by most of the ratings agencies. This is largely because Asian governments have managed their finances in a more prudent fashion following the Asian financial crisis of 1998. As a rule, Asian countries have healthy foreign exchange reserves, policy-makers have tended to try and support economic growth historically and corporate and consumer default rates have tended to be lower than other EM regions.

Given all that, the IG ratings look justified. This means the ratings agencies see lower default risk than in other regions and investors are less likely to suffer capital loss versus investments in other regions which are all mostly non-IG.

Even with the impact of trade tariffs, the Asian region is expected to grow at a faster pace than the rest of the world. However, the growth rate is likely to be slower than 2016 and 2017. This can benefit bond markets as slower growth reduces the need for interest rates to rise, certainly compared to other parts of EM, so investors in Asian credit should remain relatively well insulated from capital losses resulting from market movements.

The key headline risks for Asia are signs of slowdown in China and potential for an escalation of trade tensions between China and the US. October brought the news of a larger-than-expected moderation in Chinese GDP growth in the third quarter, to 6.5% from 6.7%. Given that this does not reflect the impact of trade tariffs, which were largely implemented in late-September, there are concerns of further slowing.

A key part of the story and another headline risk is the Chinese real estate sector, which is a substantial component of the Asian corporate bond market, particularly in high yield, and contains some of the most conspicuously low valuations.

With concerns over a slowing housing market and higher levels of debt amongst leveraged Chinese real estate companies, the Chinese authorities have been targeting a moderation in property prices, particularly in the residential market, since 2016.  These efforts seem to have had the effect the authorities wanted. The third quarter data showed a slowdown in mortgage lending, land sales and real estate investment and we are now seeing weaker real estate companies experiencing credit stress.

Overall, a moderate supportive policy response from the central bank seems quite likely, while a moderation in growth is less of a concern for bond investors.

“Default rates in Asia have increased slightly, from a low level, and remain below the global average,” said George. “We expect a moderate increase in 2019, but certainly not enough to justify the current valuation levels.”