Facebook whistleblower Frances Haugen looks at how investors can push for improved safeguarding and governance in social media companies in the second of a two-part article. 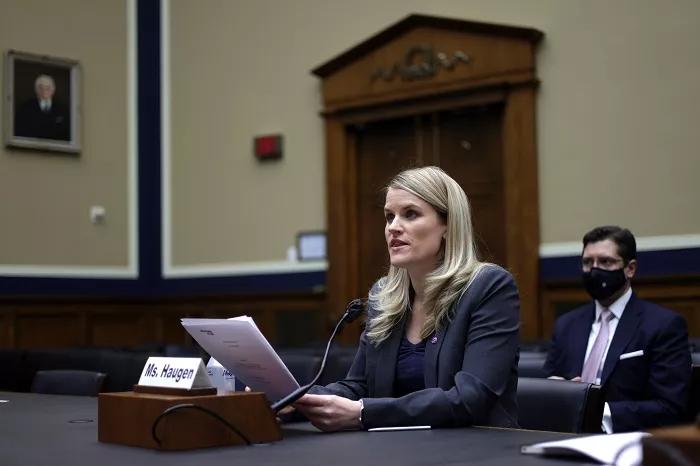 Many investors have shied away from owning stock in social media companies as issues around online harm and misinformation have become increasingly well-documented.

This is particularly if ESG (Environmental, Social and Governance) factors are important to how an investor chooses to construct their portfolio. However, investors can also have the power to hold social media businesses to account and influence them to change for the better. This can be a more impactful approach than simply divesting, according to whistleblower Frances Haugen, who was once a Product Manager at Facebook. In 2021, she left the business and subsequently became a vocal critic of its parent company, Meta, and many of its competitors.

Can algorithms be improved?

One of the most fundamental problems with Facebook, Haugen argues, is that the content selected by its AI-powered algorithms to appear in people’s newsfeeds is biased towards maximising user interactions, or clicks.

While solutions are within reach, they can be costly or damaging to growth – therefore social media companies are currently disincentivised to pursue them.

Short of recruiting armies of human moderators, one route that has been mooted is to attempt to minimise the negative effects of the AI that decides which content appears in newsfeeds. “Every single AI has biases,” says Haugen. One reason for this is that the biases of the programmers who write the algorithms are – intentionally or not – often embedded into the code. “But the only way you get a less biased AI is by having more people looking at the outcomes – which means having safe AI is a cost centre,” she says.

Haugen also believes that increased competition in the market, driven by anti-trust litigation, is an unrealistic solution. In theory, this could incentivise networks to clean up their act as users would simply vote with their feet if they are dissatisfied with a platform’s behaviour.

However, the issue here is that each social media network requires a critical mass to attract users – in other words, people will only want to be where their friends, and a significant number of other people, are. “Moving people over as a group is really, really difficult,” Haugen says.

The same goes for interoperability between networks, she argues – that is, where people using one network, such as Facebook, are able to interact with people using another, such as Twitter, without needing to leave the one they are on.

In practice, says Haugen, this is unlikely to work. The main challenge, she explains, is data privacy and security vulnerabilities. “The reason we got Cambridge Analytica is because people pressured Facebook to open up its data so other organisations could compete with it,” she says. “And what we saw was that Cambridge Analytica sucked out data on tens of millions of people so they could do psychometric modelling on them.”

The need for ESG standards

To really move the needle in favour of greater online safety, it is incumbent on investors to hold social media businesses to account, says Haugen. “We need to ask: How can we use capital as a lever for good behaviour?”

By way of a solution, Haugen argues that a set of ESG standards should be established that companies would be expected to adhere to.

One of the most important improvements that this could engender, she argues, is increased openness, as this is likely to encourage businesses to behave more responsibly due to increased public scrutiny.

“We need more transparency, and an ecosystem of actors asking questions – if they are all applying pressure meaningfully, it changes the behaviour of companies. That’s why action from investors is so important.”

"All harms on social media are concentrated. For example, for COVID misinformation in the United States, 80% of it went to 4% of the population"

She also explains that it’s vital to interrogate the data that the companies release, as it can potentially be skewed – for example, towards English-language versions rather than demonstrating the true global picture. “The things you need to ask are: how did you get this number? Did you get it manually or did you use AI? What languages does it relate to?”

Understanding the “concentration of harm” is critical too, she adds. “All harms on social media are concentrated. For example, for COVID misinformation in the United States, 80% of it went to 4% of the population. As a result, the average person might not have seen that much misinformation, but the 4% that got it showed up at school board meetings and screamed at people.”

ESG standards could also help to place a strong focus on internal governance, says Haugen. By way of example, she points to the differences between Twitter and Facebook in their own internal reporting of policies. For each, “there’s a set of people who are responsible for saying what content can or cannot be on their platform. At Twitter, these people report directly to the CEO. At Facebook, they report to the same node as the public lobbyists – the people who are responsible for making governments happy. So instead of resolving at the highest level of the company, you have conflicts.”

Despite the many ills Haugen sees in social media, investors simply walking away from such companies is not the answer, she maintains. “Some ESG funds have divested from Facebook,” she says. “But it’s one thing to do that. It’s another to say: ‘this is what good looks like, and we’re going to reward good. Here are specific ways you could change’. There is a big opportunity in this area.”

Ultimately, Haugen is optimistic about how companies can improve, given an effective set of ESG standards – and in a relatively short space of time.

“It’s not a 20-year process,” she says. “I think we’ve meaningfully changed the conversation, even in a year. And five years from now it’s going to be very different again. We’re entering a new space where even the fact that we get those conversations is starting to make a difference already.”

Read the first part of this article here, to find out the challenges around social media.

For information purposes only. You should seek professional advice for your individual circumstances.

Our minimum sum for investment management