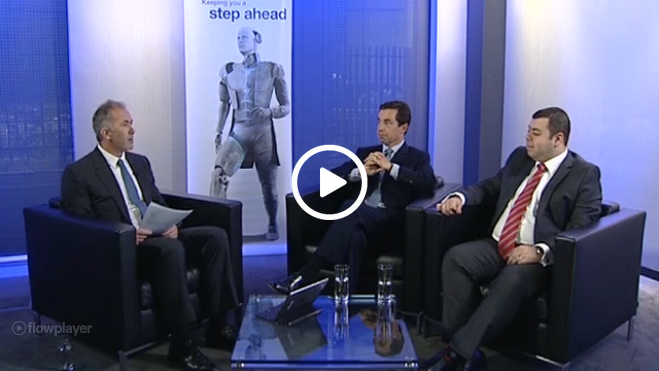 The latest Schroders Live took place against a backdrop of plummeting energy prices and with the European  Central Bank (ECB) poised to embark on a programme of sovereign bond purchases. These issues were among  those discussed by Peter Harrison, Head of Investment, and Keith Wade, Chief Economist and Strategist, as they  assessed the current market situation and the road ahead.

With the price of Brent crude oil near a six-year low at around $45 barrel, both panellists observed that economists and  investors have very different views on the ramifications of such low prices. “As an economist, I think a fall in oil prices is really positive for the world economy and it is exactly like a tax cut,” Keith  Wade said. “For the US consumer for example, it is a boost to disposable income of just over 1%. Given that US  consumers spend nearly all the income they get, this will flow through to consumer spending and into stronger GDP  growth.”

He pointed out that the uncertainty among investors about when the oil price will stabilise is weighing on market sentiment.  “I can see why parts of the market are concerned: there is a risk of defaults in some corporates and even on a country  level, but for the economy as a whole it is a benefit and we are thinking of upgrading our forecast for global growth for next  year.”

Explaining the ongoing volatility in equities, Peter Harrison said: “Economists got it so wrong and there is such a worry  about why oil prices are where they are. There is concern in equity markets about whether it is a supply issue, a  geopolitical issue, or a demand issue. One of the nagging doubts among equity investors currently is whether the world  economy is soggier than they thought. Just as we thought we had a clear roadmap ahead, we now have one of the most  important variables shifting by the third largest move since 1900.”

Asked whether the impact of a low oil price will be felt particularly hard in emerging markets, considering countries such as  China are hugely reliant on energy imports, Peter Harrison said investors need to consider the specifics of each individual  country. “But in aggregate, lower energy prices are probably not good news for emerging relative to developed markets.”

Regarding the US, Keith Wade re-emphasised the positive view he has held for some time, pointing out that although there  is likely to be a slowdown in corporate capital expenditure, there have been recent signs of strengthening retail spending  data. Furthermore, lower energy costs will benefit the margins of all non-energy related companies.

Is deflation a threat?

UK inflation data released this week showed a sharp fall in inflation from 1% to 0.5%. Peter Harrison said, however, that he  does not expect to see a Japan-like scenario where, due to a lack of confidence, it was a struggle to create wage growth.  “We’ve adjusted ourselves to a new lower level of wage growth. Although we’re going to have some very low inflation  numbers over the next 12 months, I do not think it will cause a crisis of confidence.”

Keith Wade added that it is important to remember that the reason for falling inflation is lower energy prices, and pointed  out that the UK will see real wage growth for the first time since the financial crisis.

The ECB has a more pessimistic stance than the UK on falling inflation, according to Keith Wade. “Mario Draghi and the  ECB are concerned that it will feed into expectations and people will begin to expect that prices will fall further, which will  change wage behaviour and consumer spending behaviour, and start to make the eurozone look like Japan. I do not think  this will happen and I do not see it in the data. But that is what they are worried about,” he said.

QE for the eurozone approaching

Moving onto the subject of quantitative easing (QE) in the eurozone, Keith Wade said he fully expects it to be announced  later this month and that markets are prepared for it. He pointed out that they are likely to only buy investment grade  bonds, and only from countries sticking to their reform programmes. “This will be a message to Greece,” he said. He also  pointed out that an ECB bond buying programme would have to predominantly focus on bunds, specifically bunds that are  longer dated than 5 years, as below that level real yields are currently negative.

Will Greece leave the euro?

Keith Wade does not expect a “Grexit”, observing that latest opinion polls show that 75% of Greeks want to stay in the  currency union. He also pointed out that the previously hard-line Syriza Party has been softening its tone towards the  eurozone as the likelihood grows that it will gain power in this month’s election. “Also, remarkably the Greek economy is  starting to grow as the benefits of austerity and cost cutting are starting to come through. There will be some volatility  around it as Syriza try to negotiate its bailout programme. They may be able to improve it but I don’t think it will cause a  wider problem,” he said.

Peter Harrison pointed out that Greek bond yields do not currently reflect a likely exit from the euro; however, he thinks  bouts of worry over the eurozone will continue, especially with the ongoing debate around the UK’s exit, which will intensify  as the UK general election approaches.

On currencies, Keith Wade expects the US dollar to remain strong and the Federal Reserve to be the first major Western  central bank to raise interest rates. He is more cautious on the pound sterling, as he anticipates that the upcoming general  election will cause a great deal of uncertainty. In addition, the UK is running a current account deficit and a large budget  deficit. “The UK has a twin deficit problem, which normally spells problem for the currency, so I expect sterling to be a bit  weaker,” he said.

Regarding the outlook for various asset classes, Peter Harrison found in favour of equities. “There will be a higher level of volatility than we’ve seen in past years, and I think that despite value not being clear, nobody is pointing to markets being  egregiously expensive.” He added that he would definitely favour the value approach in equities, favouring the “less  glamorous” end of markets. “If you think 12 months ahead, some of the negativity about oil may start to wash over and  people will start to pick through the remnants of that and find areas that could perform well,” he said. Keith Wade, meanwhile, prefers multi-asset. “This period of volatility will last a bit longer as investors wait for oil to  stabilise. Whilst I like equities, today I would choose multi-asset,” he said.

Important Information:
The views and opinions contained herein are those of Peter Harrison and Keith Wade, and may not necessarily represent views expressed or reflected in  other Schroders communications, strategies or funds. This document is intended to be for information purposes only and it is not intended as promotional  material in any respect. The material is not intended as an offer or solicitation for the purchase or sale of any financial instrument. The material is not intended  to provide, and should not be relied on for, accounting, legal or tax advice, or investment recommendations. Information herein is believed to be reliable but  Schroders does not warrant its completeness or accuracy. No responsibility can be accepted for errors of fact or opinion. Reliance should not be placed on  the views and information in the document when taking individual investment and/or strategic decisions. Past performance is not a reliable indicator of future  results, prices of shares and the income from them may fall as well as rise and investors may not get back the amount originally invested. Issued by Schroder  Investment Management Limited, 31 Gresham Street, London EC2V 7QA . Registration No. 1893220. Authorised and regulated by the Financial Conduct  Authority. For your security, communications may be taped or monitored.